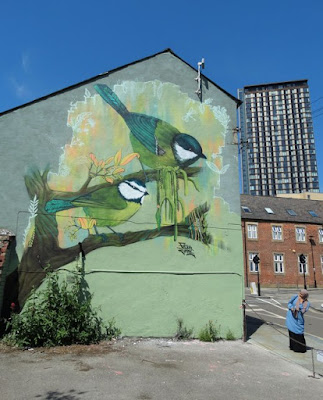 Here in Sheffield we have some brilliant street artists. There's a young couple who go by the pseudonyms "Rocket01" and "Faunagraphic". I have even met them  - as they were taking a break from working on a gable end wall near the old Abbeydale cinema.

It used to be that as you walked up from Sheffield's Midland Railway Station towards the city centre you would be greeted by a super mural by Rocket01 - showing the TV wildlife presenter David Attenborough. Many people remarked on it. It was infinitely better than looking at a plain brick wall and in demonstrated just how quality street art could enhance a city.

Tragically, for reasons I don't understand, several of Rocket01's murals have been targeted by vandals. They must hurl bags of white emulsion paint at the murals, desecrating the imagery and destroying hours of patient and skilful work. It's heartbreaking for an admirer like me so Lord knows how Rocket01 must feel about it.

True to form, the vandal or vandals struck the David Attenborough mural a month ago. I hoped that Rocket01 might repair it but instead it has now been replaced by a new mural created by Faunagraphic depicting bluetits. It's one of her favourite themes.

Vandalism isn't always despicable - sometimes it can convey powerful messages. However, in this instance I remain very disgruntled. The David Attenborough mural was something Sheffield could be proud of and now it has gone because of a mindless scrote who is probably jealous of Rocket01's craftsmanship. It is little compensation that I captured it for posterity with my camera. 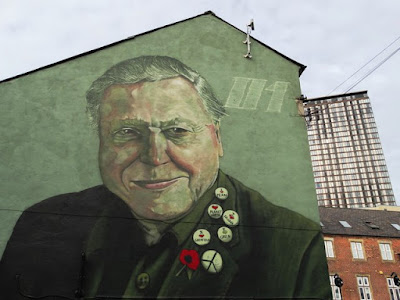 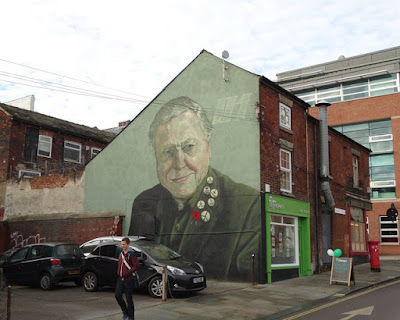