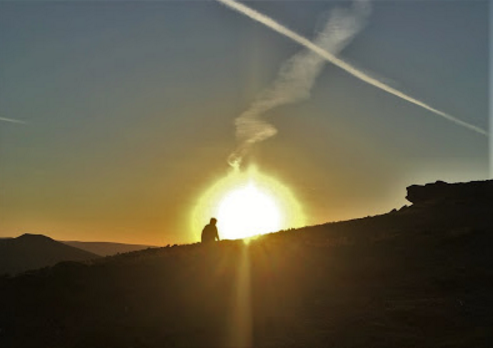 If you scour this blog you will find very few pictures of me. I tend to lurk in the background like a predator or a secret agent. Out there in my beloved country, I have taken  thousands of pictures but I am always behind the lens, surveying the landscape with my eagle eye.

On Saturday night, just after eight o' clock, Shirley, Frances and I drove out into the Peak District so that I could lead them on a little walk through the bracken to Bamford Edge. Neither of them had been there before and it seemed so right to make use of the last couple of hours of such a long hot summer's day. I love this time of year for the light that stretches from half past three in the morning to half past ten at night, leaving around five hours of proper night-time.

Up to Bamford Edge as the sun began its descent into the Pennine Hills. Little did I know that behind me the beloved daughter was aiming her i-phone in my direction. I was stepping into the sunshine like a religious convert or an early man ascending from the apes, I love that picture - at the top of this post. I am Heathcliff marauding across the moors by Wuthering Heights.

We looked over Ladybower Reservoir and they were both stunned by the view which we absorbed for a few minutes. Then we descended the edge and jumped in "Clint" for a short drive to "The Anglers Rest" in Bamford. This is a pub that is operated by the local community following a buy-out from the previous commercial owners. It was nice to quench our thirsts in such a place.
- June 19, 2017