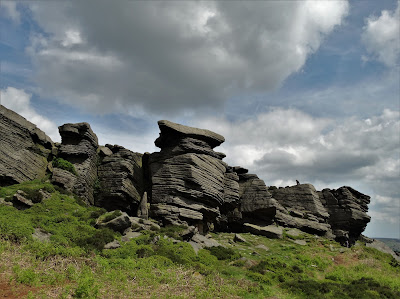 Let us continue with "Yorkshire Pudding's Guide to North Derbyshire". In this chapter, your intrepid correspondent, shunned off any lingering knee pains and ignored the threat of being attacked by vicious hill sheep in order to bring you several pictures from Bamford Edge.

This millstone edge looks west towards Win Hill at a point where The Derwent Valley narrows on its way into The Hope Valley. There it meets The River Noe and together they continue their  long journey to The River Humber and onward into The North Sea.
To the south, you look down upon the village of Bamford, nestled in the valley, its mornings forever arriving late because of the shade of the millstone edge.

There were a couple of rock climbers testing themselves on Bamford Edge - on a rock known as Gun Buttress. Nearby a girl of oriental appearance waved to me as I pointed my camera up at the tall rock on which she was standing, admiring the view with her companions.
East of the edge I looked across the wide expanse of Bamford Moor towards Stanage Edge.Long ago the moor was settled by our neolithic ancestors and amongst the moorland vegetation there is still tantalising archaeological evidence that they were here - primitive stone circles and cairns. Back then the moor was mostly wooded.

And so your intrepid reporter, descended the treacherous rough path that leads back to New Road. Breathlessly he opened the car door and slumped into the driver';s seat still clasping his trusty camera that now contained the accompanying photographs. 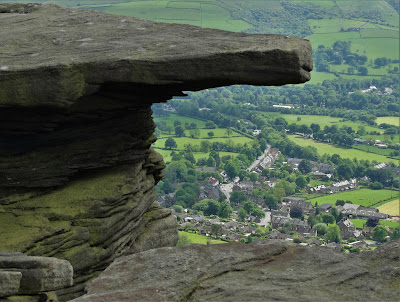