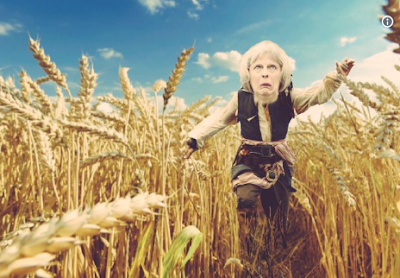 Prior to Britain's very recent General Election, PM Theresa May was interviewed by an experienced ITV journalist called Julie Etchingham. Attempting to delve deeper to find out more about the prime minister's personality, Miss Etchingham asked "What's the naughtiest thing you ever did?"

Theresa May squirmed visibly in her seat, her mouth twisting nervously. It was a question she hadn't anticipated and obviously not one her advisers had prepared her for. There was an uncomfortable pause before Theresa May admitted that when she was a girl, she and her friend used to run through a field of wheat. It was the best she could come up with.

Still grinning uncomfortably she conjectured that the local farmer would have been most unhappy if he had witnessed this terrible behaviour.

There were other ways in which Theresa May could have dealt with this question. For example, she could have bounced it back at Julie Etchingham  saying you tell me yours and I'll tell you mine. Alternatively, she could have said that she found such a question irrelevant ahead of an important election. Instead, she gave her excruciating response that simply added weight to the growing perception that Mrs May is very prim and proper and has a poor connection with ordinary people's lives and is out of her depth. Far from being "strong and stable" she is clearly terribly self-conscious, lacking the common touch. She has been exposed. Not a bad human being but not a natural leader either.

If I was being interviewed on television and an interviewer asked me what was the naughtiest thing I had ever done, many things would flash through my mind. However, I wouldn't wish to share any of them with the watching television audience. Hell, I wouldn't even share the majority of them with Yorkshire Pudding blog visitors. How about you? What's the naughtiest thing you ever did?
- June 11, 2017