I have finished two novels very recently - "The Quarry" by the late Iain Banks and "East of Hounslow" by Khurrum Rahman. I picked up the first one in a British Heart Foundation charity shop and the second one was given to me by our beloved son at Christmastime. It was one of several new books he picked up for free from Harper Collins publishers. They were responsible for printing the "Bosh!" cookbook which, by the way, is now officially the best selling vegan cookery book of all time! Amazing.

Anyway back to the two novels. Please don't worry - I am not going to bore you with intricate synopses. They were both mostly set in modern day England. Banks's novel has barely a plot, little character development and the action almost all takes place in one location – a crumbling home perched on the edge of a quarry. It belongs to Guy who is dying of cancer and his autistic son Kit. One weekend they have house guests in the form of Guy's old university friends.It is as if they are saying goodbye.

"East of Hounslow" is a first novel by a young Muslim writer - Hounslow being a suburb of west London. The writer focuses upon young Muslims and the tensions in their urban lives. He explores ways in which terrorists might be made. The central character Javid - or Jay - travels to Islamabad for training but he has previously been tapped by MI5 - the British secret service. It becomes his mission to thwart a Boxing Day terrorist attack in the streets of London.

Both books contained significant measures of anger and frustration. There's swearing and aggression. However, I read them and quite enjoyed them. They were certainly readable and it was no bother to keep turning the pages but in the end there was no real delight, no feeling of happy denouement. I wasn't uplifted. Perhaps the next book I read will be "Eleanor Oliphant is Completely Fine" by Gail Honeyman. I have heard that it is a very nice book, enjoyed by many women - my wife and daughter included.

By the way, just before I sign off for today, when we were in Port William in Scotland we went into the Port William community charity shop. In one corner there were two bookcases containing donated secondhand books. Each bookcase had a label at the top. One label read "Men's Books", the other read - "Women's Books". This made me chuckle and I even considered asking where the transsexual books were - but of course I didn't. "I'm a Big Chicken" by Yorkshire Pudding... 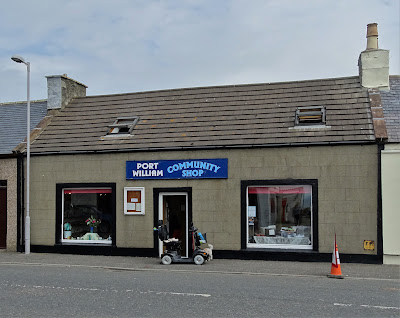