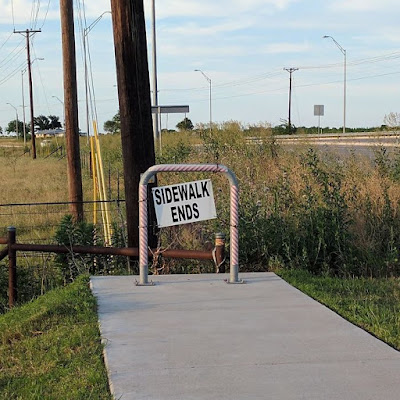 Monsieur Robin - the French brother recently sent me this photograph but it wasn't  taken in France. It was taken in Trumpland (formerly the USA). I guess that Trumpians need that kind of signage.

Co-incidentally, the word "sidewalk" is one of those Americanisms that really grates on me. To me a "sidewalk" is when you are moving sideways like a crab. This is something I do frequently when  moving along our English pavements and footpaths.

Thank heavens the word "sidewalk" (meaning pavement) has not yet been absorbed into English parlance. With the imperial influence of American culture since World War II, many American terms have crossed the Atlantic and weaselled their way into our everyday speech and writing. Like linguistic grey squirrels they drive out the red squirrels of our communicatory heritage.

I may have said it before, but another irritating Americanism that has not been with us very long is "standout" - as in "The striker had a standout performance". Ten years ago a British commentator would have said. "The striker's performance was outstanding". Now they are all using "standout" - even cricket commentators. It's just not cricket!
- August 25, 2018