Around midday the brother who lives in France telephoned. It was just as I was about to toddle off into Derbyshire for a three mile circular walk. Phone conversations with Robin can take an hour or more as we relate news, remember and grumble. I have to remind myself to avoid mentioning Trump. Robin admires his cavalier style while I despise it.

Anyway, consequently I was late setting off into Derbyshire. It was a bright but overcast afternoon. I parked near Curbar Edge and proceeded along on the moorland track that leads to Wellington's Monument.  Not the best of days for photography but even so I gathered a few images and five of them accompany this blogpost. 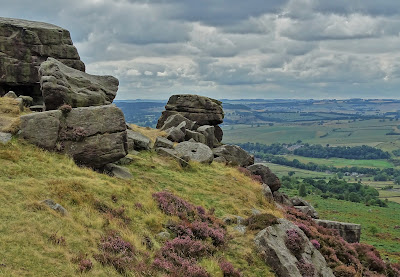 Down to Over End on the edge of Baslow village. There were some grand stone houses here with flashy cars parked in the driveways. There was the aroma of money in the air. Perhaps this is where Michael Vaughan - the ex-England cricket captain resides with his wife and family. I know he lives in Baslow.

Along Gorsebank Lane to Gorsebank Farm where an old collie sheepdog came out to bark at me. On the concrete in the farmyard the date 1970 was imprinted - a year I remember well when I was sweet sixteen. The dog slinked away. His muzzle was half black and half white. I would have called him Chess. 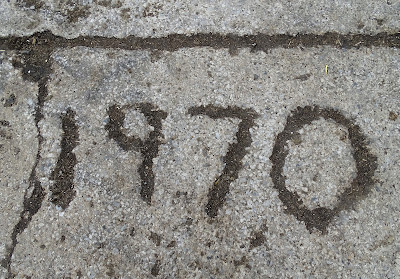 Then onwards. I met a woman who was picking brambles. She said she had not seen a soul before me and I said that I don't have a soul and she said that I must have if I had chosen to walk below Baslow Edge. We laughed. Her green supermarket bag was bursting with sweet berries and when I left her I picked brambles for my own mouth. The sweet taste of summer.

Back home I made tea (dinner to southerners). Shirley came in from her shift at the health centre. The tea was chicken steak with a creamy mushroom sauce I had made from scratch, new buttered potatoes and runner beans from our garden. 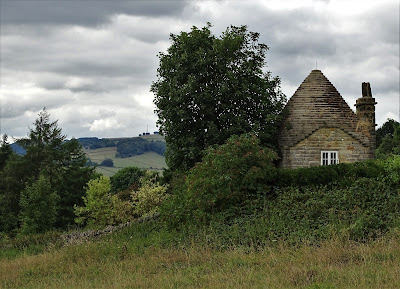 At six we set off for the nearby town of Rotherham. I had tickets to see Rotherham United v Hull City. The game kicked off at 7.45pm and I am happy to report that we won our first game of the season by three goals to two! Two of our goals were scored by our long-haired Australian player, Jackson Irvine. Someone has created a new chant for him - to the tune of Neil Diamond's "Sweet Caroline":-
Jackson Irvine!
Long hair never looked so  good!
So good! So good! SO GOOD! (repeat)

We drove back to Sheffield, lifted by the victory and Shirley dropped me off at the local pub for three celebratory pints of the brown nectar - "Tetley's Bitter". Beverage of the gods.
- August 22, 2018