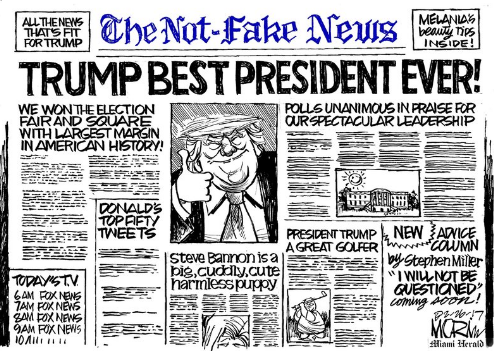 With Trump, the mis-information began in the very first White House press briefing when his squeaky puppet - Sean Spicer - angrily challenged  estimates of the 45th president inauguration ceremony crowd. And yet the pictures were clear. The turn-out was much lower than for President Obama. Publicly at least, Spicer's  jaw-dropping denial was the start of the new president's fakery - his fake news.  Privately, the fakery had begun long before that.

In Trumpian philosophy, these appear to be the central tenets:-
But now, after the court appearances of Cohen and Manafort the lasso is starting to tighten. How will Trump wriggle free? Surely, surely in the end truth will win out and rightfulness will reclaim its seat and Trump will be resigned to history with his tail between his legs. It has to happen.

Recently, one or two British TV documentaries have brought typical US Trump supporters into our homes. Universally, they seem like decent people who are proud of their country and wish to live happy, fulfilling lives. But regarding Trump they appear to have one very dangerous thing in common - blind faith. What does it matter if Trump paid off prostitutes? What does it matter if The Russians helped to get him elected? What does it matter if he lied or cheated or if he used bullying tactics to build his real estate empire? After all, nobody's perfect and he's doing a good job - starting to make America great again - just like he promised. Unlike the rest he's a businessman, a man of action.

This blind faith reminds me of frightening religious cults or Islamic fundamentalism. It's hard to argue with it because adherents do not wish to argue. Believing in Trump has become a mast to cling to in a stormy sea. They just do not want to let go.

If Trump announced that he had won a purple heart in Vietnam for his heroism in the heat of battle, they would probably rather believe him than any whining fake media reports that he had in fact avoided the draft by claiming to have a "bone spur" in his foot. Some hero! In stark contrast, John F. Kennedy did win a purple heart for gallantry as the skipper of a gunboat - close to The Solomon Islands in 1943. If pressed, Trump would probably say that if Kennedy was a hero, how come he allowed his boat to catch fire when the Japanese destroyer rammed it?
- August 23, 2018