Here in Great Britain there is a prominent right wing politician called Boris Johnson. Until very recently, his mop-haired buffoon was our foreign secretary - but he resigned - ostensibly in relation to the way our nation's "exit" from the European Union is going.

As a boy, Johnson went to exclusive Eton School - beloved of the wealthy and the noble - before proceeding to Oxford University. Johnson loves the sound of his own voice and seems to enjoy stirring up controversy. Many political commentators believe that all his bluster is merely a thin disguise for his burning ambition to become this country's prime minister.

Currently, he is in the middle of an on-going debate about the way in which a  small proportion of Muslim women dress. In a recent speech, he compared women who wear burqas and other forms of face-concealing headwear to letter boxes or bank robbers. He said such concealing garments are "ridiculous" and that he could find no scriptural justification for them in The Quran. 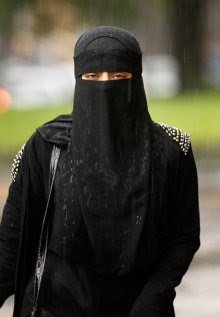 In several European countries - including Denmark, Belgium and France - the burqa is now banned and in bringing the topic up Johnson was tuning in to widespread public distaste about what many see as alien forms of dress that have no place in the free world.

I find myself quite conflicted about burqas, niqabs and even hajibs. As a lifelong atheist I am suspicious of all religious belief and the often medieval practices that may accompany such belief. I am also a proud feminist and hate to see any oppression of women. Women are men's equals and I feel that they should walk our streets as equals, proudly showing their faces, not veiled from public view.

Another thing I think about the burqa is this - are the women who choose to hide their faces able to explain this choice, living as they do within a liberal western democracy?  I suspect that the choice is often a self-indulgence, approved by menfolk and driven by social expectations rather than well-considered religious philosophy.

I am a pretty tolerant fellow but toleration must surely have some limits. Should we tolerate anything and everything? As I say, I feel quite conflicted about the burqa issue. What do you think?
- August 10, 2018