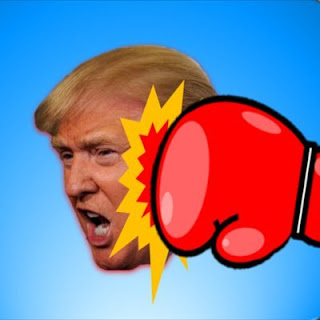 Let us imagine this scenario.

I am on holiday in Miami Beach. After a long flight from England, I cannot sleep so I am up early with the sunrise. Down on the beach I see a flabby lone figure jogging slowly towards me -  huffing and panting like a wildebeest after a stampede.

I notice that he is wearing an elasticated red headband and that his hair is the colour of the morning sun glistening on the waves. As he gets closer, my lower jaw sags in disbelief. It can't be can it? But it is! It's Donald J. Trump - the forty fifth president of the USA.

Without any preliminary conversation or further ado, I challenge Trump to a fist fight on behalf of righteous people everywhere. With a "Thwack!" and an "Uggh!" and a "Crrrrunch!", it isn't long before I have Trump at my mercy. Pathetically, he is whining, "Please. No. I'm sorry!" but I show no mercy. My right arm circles like a windmill sail in a gale and I make one final almighty connection with Trump's chin.

He collapses like a sack of turnips onto the Miami sand, his skull connecting sickeningly with a big beach stone. In alarm, I slap Trump's podgy cheeks. They quiver but there is no response from The Leader of the Free World. His heavy breathing has ceased and in terrible fear. I realise that I have in effect assassinated him. It was not what I was expecting from a sunshine holiday in  Florida. Hell, I suddenly realise, I will go down in history like Lee Harvey Oswald or John Wilkes Booth. I so much wanted to be a poet - not an assassin!

What can I do? The secret service guys who had been trailing Trump are already sprinting up the beach towards me. I run away and cower in a nearby parking lot. Now I am the one huffing and puffing like an exhausted wildebeest. And this is where the cops find me a few minutes later.

I raise my hands to the sky and plead "Don't Shoot!"

Months pass by as I languish in Florida State Penitentiary at Raiford near Jacksonville. Then one day the prison governor comes to my cell and tells me that I will be executed at the end of the week. President Pence has rejected all claims for clemency. "The sentence must be enacted! God's will must be done!" he announces in an interview with Fox News.

The governor, who is a kindly man,  says that I can have any meal I choose the night before my electrocution and without hesitation I say, "A large battered cod, chips, mushy peas, a pot of tea and a slice of bread and butter from The Magpie Cafe in Whitby, Yorkshire!"