In creating my "seven deadly sins" poems, it has occurred to me that in the modern world there are extra sins that hadn't even been imagined in medieval times. Perhaps you can identify some other modern day deadly sins but here are mine. They are not in any order of significance...


SIN 1 Talking on a mobile phone whilst driving - When ever I see this sin happening, my blood boils and in summertime, when car windows are open, I may be heard yelling "Get off the phone!" to startled drivers at traffic lights. Talking on a mobile phone whilst driving is just as bad as driving after over-consumption of alcohol because the sinner is not in proper control of his/her vehicle and is putting other people's lives in peril. 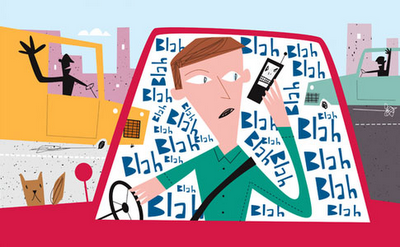 SIN 2 Unsolicited phone calls - They tend to come from Indian call centres and are all about hoodwinking innocent phone users into parting with their hard-earned money. Often you'll know when its one of these b******s phoning because their number will be withheld and after you have picked up the receiver there'll be a significant pause before the caller speaks. My advice is simply to yell down the phone either "NEVER PHONE THIS NUMBER AGAIN!" or "I AM PUTTING A CURSE ON YOU!" before swiftly ending the call.

SIN 3 Being a Conservative - Political conservatism in England is but a thinly disguised campaign to drive our great country back to the social stratification of Victorian times - the rich man in his castle - the poor man at his gate. David Cameron and his privileged chums have never really worked or lived like ordinary citizens. They are out of touch and their policies and political language are all about boosting the rich and suppressing the poor. Their attitude towards the unemployed is especially peevish. The Conservatives have always been a huge hindrance to genuine equality.

SIN 4 Smoking cigarettes - What a disgusting habit! Smokers not only stink of stale tobacco smoke, they also have a draining effect upon the National Health Service. We non-smokers have to suffer the stench while the government rakes in huge tobacco taxes. Any smokers who huddle outside public buildings or workplaces should be fair game for marksmen.

SIN 5 Dropping litter - In past times, people were much more environmentally responsible without even thinking about it. Theirs was a "make and mend" lifestyle and hardly anything would be thrown away. But today city streets and beautiful countryside can be blighted by litter, carelessly dropped by unthinking citizens. Litter may be small in size - a cigarette butt or a piece of chewing gum for example - or it may be large - an old mattress or a a pile of discarded tyres. Big or small, litter is hateful and the same marksmen hired to eliminate huddles of smokers should also take out litter bugs.
SIN 6 Blogstipation You know how it is. You follow a blog for weeks, months, perhaps even years and then it suddenly dries up. You keep returning to the same old blogpost as it gathers dust and cobwebs but activity has come to a grinding  halt. It should be the law that if you decide to "freeze" a blog for ages you must put up an explanatory note - rather like the ones you used to see in shop doors - "Back in five minutes" or "Closed for family holiday - back on October 31st". But just leaving a blog unattended is the height of bad manners and guilty bloggers should be tarred and feathered.

SIN 7 Slagging off "EastEnders" Since it began in February 1985, "EastEnders" has travelled a remarkable journey and I have been with this "soap" all the way. Sometimes the writing and the acting have been of a supreme quality but like any play by Shakespeare all soaps necessarily have troughs as well as their peaks. Many intellectual snobs have dismissed "EastEnders" as "morbid" or "miserable" without really watching the show week in and week out as I do. There has always been humour and I applaud the teams of people who have crafted this remarkable continuing drama through the years. Anyone heard slagging the show off in my hearing will be subject to a bare-knuckle fight behind the Queen Vic!

Envy, greed, lust, gluttony, sloth, pride, wrath? Such sins are mild compared with the above. What would you add?
- October 25, 2012