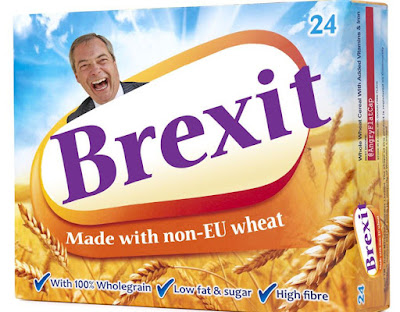 Brexit is a horrid word. It sounds as if it has been dreamed up by a slick advertising agency more used to running campaigns for new breakfast cereals or D.I.Y. products than contemplating the future direction of a nation.

Or it might be a new street dance, a passing fad with associated rap-style lyrics - "Uh-uh-uh! Gonna do it honey! Down in the hood - Uh-uh-uh! Don't need no money honey! Gonna flex it at the exit! Let's Brexit! Gonna Brexit! Just text it!"

Many American visitors tune in to this blog. I know that most of them have heard about Brexit and yet they are puzzled about what's going on over here in The United Kingdom. To these American readers I say - join the club! British people - just like their politicians don't know what's going on either. It is all an unholy mess.

Tonight our beloved leader, Theresa May has promised that she will resign her leadership if only our parliament will get her wishy washy exit "deal" with The European Union over the line. It has been heavily defeated twice in parliament and she badly wants to give it one more try, But isn't that weird? If she is successful in getting her "deal" through, the reward will be her resignation! Very strange.

Yesterday, pollsters determined that if there was a re-run of the Brexit referendum tomorrow, the British people would vote heavily to remain in The European Union, not to leave as they did in 2016.

Apart from anything else, two million old people have died since June 2016 and two million young people have reached voting age. Generally speaking, the old voted to leave Europe and the young voted to remain. Besides, in 2016, nobody forewarned the country that leaving Europe would be so complicated and so economically damaging.

I voted "Remain" in 2016 and have never regretted that choice. Lord knows, The European Union has its faults and its progress towards ever closer political union is not a movement that I ever appreciated. However, "Remain" seemed the best choice because over fifty years The United Kingdom's economic relationship with Europe had become as entangled as one of those balls of rubber bands you sometimes see in office drawers.

Shamelessly, I would happily opt for another referendum. The people would vote "Remain" and then we could look back upon these past three Brexit-dominated years as an aberration, a bad dream, an attempted suicide from which we thankfully recovered.
- March 27, 2019