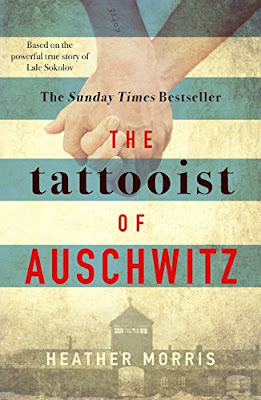 Recently I finished reading "The Tattooist of Auschwitz" by Heather Morris. As the title perhaps  suggests, it's about  someone who was responsible for tattooing numbers on the wrists of new prisoners arriving in  that Nazi hellhole. The tattooist was a prisoner called Lale Sokolov and the book is imaginatively based upon his true life story.

Heather Morris teased out the story from the man himself. He had settled in Melbourne, Australia after the war, building a new life with his wife - Gita Furman who was also incarcerated in that inhuman  nightmare of a place.

The way that Lale and Gita were able to conduct their relationship  - well for me it made it seem that Auschwitz was rather like a holiday camp. It was just too easy.

I am sure that in reality Lale and Gita went through a terrible time of fear, physical deprivation, cruelty and uncertainty. Another writer - someone different from Heather Morris - could have made their true story really bite, really hurt, really resound in one's memory. However, there was something about Heather Morris's telling of the tale that made it all seem too sweet, too flaming nice.

Though it always held my attention, "The Tattooist of Auschwitz" failed to disturb me and I am sorry about that. I think that Lale Sokolov's  tale deserved a more poignant telling in honour of the  thousands who  were so cruelly eliminated - when ordinary men did such terrible things.
- March 13, 2019