Monday morning and the birthday weekend is almost over. It has been great.

Whitstable is a smashing little seaside town with an array of independent shops along with bustling restaurants and pubs. It's all low rise - giving the coastal settlement a human scale.

The town is famous for its oysters and when the tide goes out the oyster beds are revealed. It's big business with tractors operating at the water's edge and the oysters growing happily upon large chain racks. Look to the left of the top picture and you can just make out some of the oyster beds. 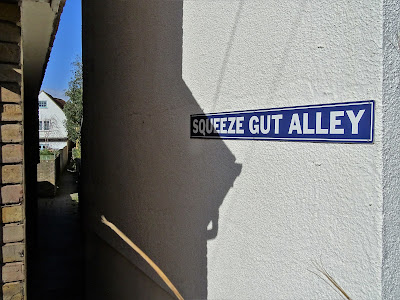 In fact our town centre rental is called Oyster Bed Cottage. It has been just perfect. Everything works. It's clean and it has its own parking space on the other side of fob-operated security gates.

London is fifty miles away. Our capital is a multi-cultural melting pot containing residents with roots in every corner of the planet. But Whitstable is not like that. Essentially, it remains a white Anglo Saxon place. On Friday night we were in the "Peter Cushing" Wetherspoons pub. A throng of local people were eating and drinking and there was a hubbub of   Kentish voices. I looked around the throng and there was not one black or Asian face. Perhaps it is little wonder that this region is the country's Brexit supporting epicentre.
I bought Shirley a  new watch by Mondaine and Frances and Stew gave her pearl earrings, Ian gave her a card with a cartoon of Freddie Mercury on the front and he's singing "MAMA OO-OO-H..." She also received many other cards that she opened on her birthday morning.

Yesterday, we drove along the coast to Margate in gorgeous sunshine and we promenaded after visiting the Tate gallery on the seafront. Later we had Italian pizzas in a rustic cafe on Whitstable high street before the young ones were driven back to the town's station.
Oh, and I forgot to mention my cunning little birthday plan. I had been in touch with a local cake maker called Tessa and when we visited the weekly farmers' market in The Umbrella Centre, there was Tessa with the cake I had ordered. She opened the box to reveal an orange and passion fruit cake with "Happy Birthday Shirley 60" iced neatly on the top. The cunning plan came to fruition and  Shirley was suitably surprised.

Very soon we'll be heading back to the land of UpNorth where the wild things are. Bye bye Whitstable and thank you for a weekend to remember.
- March 25, 2019