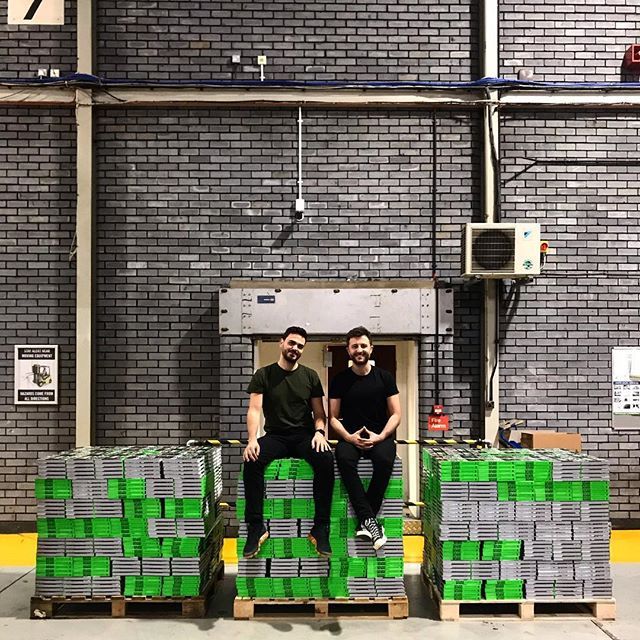 Do you remember that dog from the "Tom and Jerry" cartoons? He was called Spike and he had a son who was very much a chip off the old block. The son's name was Tyke and Spike would often proudly declare, "That's my boy!"

Well, please look at the picture above. See the fellow on the right? That's my boy!

Ian is sitting with his "Bosh!" partner Henry in a warehouse in Glasgow. They are perched on a pallet piled high with newly printed copies of "Bish Bash BOSH!" In fact, Ian tells me, that there were many more pallets off camera.

Everything is building to the new book's launch dates. Its first public reveal will be at Sheffield Hallam University on April 3rd followed by the official launch at Vegan Nights on Brick Lane in London on the evening of Thursday April 4th. Go here.

Ian also tells me that their publishers have arranged for "Bish Bash BOSH!" ads to appear on the sides of several buses in London and Sheffield. They are also renting a prime hoardings site near Euston station (American: billboard).

The first cookboook - "BOSH!" has been tremendously successful. Better than the publishers anticipated. Here at Pudding HQ we are obviously hoping that the new book will do at least as well. The dream is not going to end tomorrow but if it should, Ian and Henry have already enjoyed an amazing ride that would have seemed impossible three years ago.

Visit "Bosh!" here. Then, if interested, navigate through their various social media channels.

We plan to see Ian next weekend when we mark Shirley's 60th birthday down in Kent. Moldovan security guards with dogs will be guarding our house - just in case you were planning to take advantage of our absence.
- March 19, 2019