PART ONE
You may have seen the following ad which has been wriggling its way into the "Comments" sections of various blogs:- 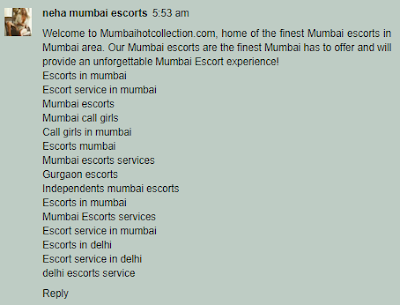 Being an inquisitive chap, I decided to contact the sender who it turns out was a Mr Achetbir Singh, a Sikh gentleman who resides in a small apartment close to the Worli Fort in Mumbai with views of Dadar Beach and Mumbai Bay.

Achetbir was surprised to receive my call. Apparently, his famous "Mumbai Escorts" advertisement has not generated much business. However, as soon as he realised that I was contemplating a sentimental trip to Mumbai, taking advantage of one of the various escort opportunities, his brain quickly switched into overdrive.

I asked him about fees, accommodation in Mumbai and how we might meet. He asked me which branch of his escort agency I wished to plump for and I selected "Mumbai Escorts Services", simply because I prefer place names to begin with capital letters.

Wind the clock forward forty eight hours and the lights of Chhatrapati Shivaji International Airport are coming into view. It has been a trouble-free flight during which I have dozed or devoted waking hours to reading "Travel Mumbai" by Shalu Sharma.


I had arrived in Bombay...or Mumbai as it is now called for some obscure reason. My parents had separately arrived here by troop ship in the early years of World War II ahead of their wartime service with the Royal Air Force and I was keen to explore the city, walking in their footsteps with the help of one of Mr Singh's knowledgeable escorts.

After picking up my suitcase from Carousel Number 7, I headed for the arrivals gate. There was much commotion and various brown-faced fellows were yelling or flourishing cardboard signs. Several men were wearing turbans and then I spotted a bearded bloke in an orange turban waving a sign that read "YORKSURE PUDINGE". Such appalling spelling! It was Mr Achetbir Singh.

"Welcome to Mumbai Mr Pudinge," he grinned before ushering me away into the sultry Mumbai night. He smelt of turmeric and used Indian banknotes. One of his front teeth had been capped with gold.