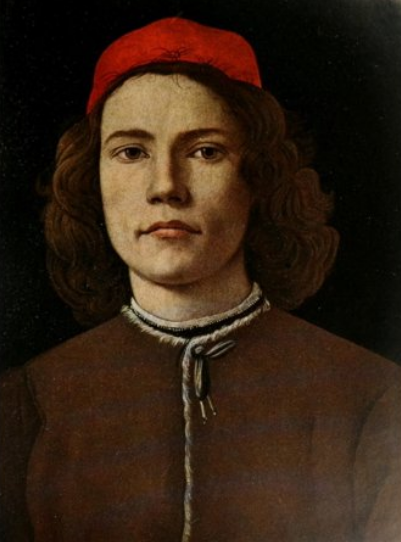 On Wednesday, when I was sorting through book donations at the Oxfam shop, I came across the portrait shown above. Not the original I hasten to add but a printed version that had fallen out of a coffee table art book.

I stared at that portrait for a few moments and I was very struck by it. At first I didn't know who painted it or when. I guessed it was created many years ago but the young man in the picture seemed so modern and defiant. It was as if he was challenging onlookers, as proud of his beliefs as  he was of his flowing brown locks.

And then I discovered that it was painted in the 1480's in Florence, Italy by no lesser artist than Alessandro Botticelli. It is known simply as "Portrait of a Young Man" and it hangs in The National Gallery in London. Nobody knows who the subject of the painting was but he reflects Florentine pride and at least one commentator has suggested that he may have been a member of the city's thriving artistic community.

In the late fifteenth century, it was customary for Italian portraits to be made in profile only. Botticelli's decision to show this young man face-on was in its time quite revolutionary.

The painting speaks to us from over five hundred years ago and it says - "Look at me. I am as sentient, and as involved in the world as you are my friend. Five hundred years means very little."

It is worth noting that Leonardo da Vinci painted "Mona Lisa" just a few years after Botticelli finished "Portrait of a Young Man". It is very possible that the latter painting informed the creation of the former and hugely more famous portrait. But I like Botticelli's picture better. The young man may have died long ago but through the painting he remains very much alive.
- March 09, 2019