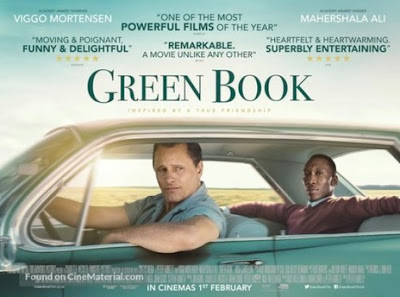 What do you do on a miserable Thursday when rain is siling down and your appointments diary is empty? In my case, I rode on the number 82 bus into the city centre. heading once again to The Showroom Cinema.

I went to see the 12 o'clock screening of "Green Book" starring Viggo Mortensen and Mahershala Ali. I had a rough idea of the plot and of course I was aware that the film won the "Best Picture" oscar at this year's Academy Awards.

Two hours later, I left The Showroom having been thoroughly entertained. "Green Book" is charming. It takes you on an American road trip and it reflects upon racism in the early nineteen sixties. It made me laugh and it made me cry and I enjoyed the chemistry between the two lead actors.

It isn't hard-hitting or gritty, it has a certain lightness of touch. However, one image that has stayed with me is of a quiet moment in The Deep South when Tony (Mortensen) and Don Shirley's (Ali's) hire car has overheated. Tony raises the hood (English:bonnet) to see what is going on and concert pianist Don Shirley also slides out of the vehicle. In a field across the road, black farm workers are quietly tilling the soil.  They look up in puzzlement as Don Shirley looks back at them. Nothing is said and soon the travellers move on. It is as if Ali's character had arrived from a different planet where Afro-Americans might have a chance to make something of their lives.


In other Pudding news. .. In January I finished reading "Endeavour" by Peter Moore. I blogged about it here. Later I e-mailed the author praising him but also raising a niggling question. I wanted to know why he had twice described Whitby boats passing "the mouth of the Ouse" when he should surely have been referring to "the mouth of the Humber". I pointed out that there is an inland point where the Yorkshire Ouse and The River Trent meet and that is where The River Humber begins.

Peter Moore kindly wrote back to me. He had taken on board my point. He wrote, "Most importantly, you'll be pleased to know that you caught me just in time and the Ouse has been transformed into the Humber for the Endeavour paperback which will be published in the summer. Thanks for that - appreciated!"

How delightful! I guess this will be the closest that I ever get to immortality. After all, time is running out - as it is for all of us. 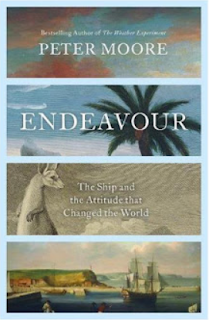