Every autumn, Sheffield hosts a "festival of words" called "Off The Shelf". There are lectures, book launches, writing events, question and answer sessions and special film screenings etcetera.

This year I have attended three special events. Firstly, a talk at The University of Sheffield by my son Ian and his Bosh! colleague Henry - promoting their latest book - "How to Live Vegan". Two weeks later I was at another venue to witness the film critic Danny Leigh talking about working class cinema and how ordinary working  people have been portrayed in films since the 1920's. It was fascinating and well-illustrated with clips.
Last evening, I attended a third event at the city's other university - Sheffield Hallam. It was a promotional talk about a new coffee table book called "Kinder Scout - The People's Mountain". It was written by Ed Douglas with photographs by John Beatty and these upland country lovers were at the front of the packed lecture theatre. 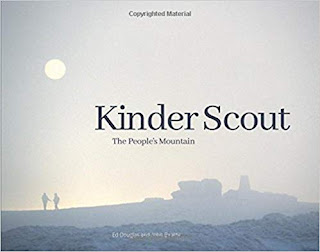 Surprisingly, Ed Douglas was pretty hopeless - mumbling away and hardly inspiring the audience. If he had been a secondary school teacher the kids would have crucified him by now. In contrast, John Beatty had presence and talked through a hundred of his wonderful pictures with passion and self-assurance. He knows Kinder Scout like the back of his hand and has spent hundreds of hours up there.
I can hear some of you saying - Kinder Scout? What's that?  It is a mountain between Manchester and Sheffield. It sits in The Pennine Hills which are the backbone of England. Kinder Scout is a strange kind of mountain. It has steep, craggy sides all round it and they lead to a boggy and largely inhospitable plateau. It is not like one of those Alpine mountains with a peak from which you can enjoy magnificent views.

I have climbed up on to the Kinder plateau several times. It is a wild place that allows your thoughts to wander. Many people have got lost up there and before modern navigational aids several aeroplanes crashed there - amidst the boggy hags and groughs.  At the edges of Kinder Scout there are various exposed rock formations - shaped by the passing centuries.
But humans have also played their part in creating the Kinder Scout we know today. Acid rain connected with coal-powered industries around Manchester has adversely affected the moorland vegetation and in several locations the  grouse shooting fraternity have sought to control the terrain in order to facilitate their "sport". Yes, Kinder Scout may feel like a lonely, wild place but it has not been immune from man's interference.

To illustrate this post, I have used two pictures by John Beatty and three of my own that I have just rediscovered on the geograph website.
- October 26, 2019