On Saturday, I caught the 7.37am train down to London. In my backpack I had a large poster that I had made on Friday evening. It read "44 MILLION PEOPLE DID NOT VOTE TO LEAVE".

Sitting across the aisle from me there was someone I recognised. It was our local Member of Parliament, a ginger fellow called Jared O'Mara. By the time our train reached Chesterfield, I had plucked up enough courage to talk to  him.

Mr O'Mara has been a controversial and rather hopeless M.P.. As a traditional Labour supporter, I feel quite angry that Labour's National Executive put him forward as the party's candidate for Sheffield Hallam back in 2017. I understand that they never imagined that he would actually win the seat - ousting Nick Clegg, the national leader of The Liberal Democrats.
Last year, O'Mara was outed for historical and unsavoury abuse through social media. He brought shame upon the local Labour party and then he left Labour to continue in parliament as an independent M.P.. His ability to properly represent his constituents and deal effectively with their issues deserves a mark of zero.

However, I am an open-minded bloke and I know that what you hear about people through media channels will often be at odds with reality. O'Mara told me that he was heading for The House of Commons to play his part in defeating the prime minister's recently achieved "deal" with The European Union. I told him that I would be joining The People's March for a second referendum and that I had voted for him in the last election.

I told him bluntly that he had let people like me down and that in my opinion he should have done the right thing and resigned his seat by now. I said that I did not vote for an "Independent". O'Mara became defensive but he had turned red and there were tears in his eyes. He said that he had never intended to let anybody down and asked me if I knew that he had been suffering from mental health issues?
Though the train was not full at this point, I noticed that some other passengers were listening in so I decided to cut the discussion short and returned to my current novel. I helped him from the train when we reached St Pancras Station and said, "Make sure you vote against Johnson and his cronies!" Wittily, O'Mara retorted, "Don't worry pal! We'll get Boris done! Enjoy your march!"

I headed for Marble Arch where I joined a million others as we marched along to parliament. seeking a second referendum to bring an end to this Brexit nightmare.  Decades had passed by since I last joined a political demonstration. I held my poster up high and added my voice to the chants and spent four hours standing in Parliament Square  as Boris Johnson was again defeated inside The House of Commons. 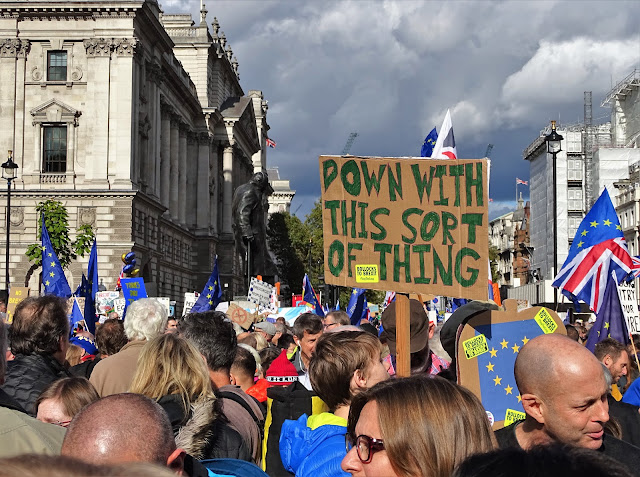