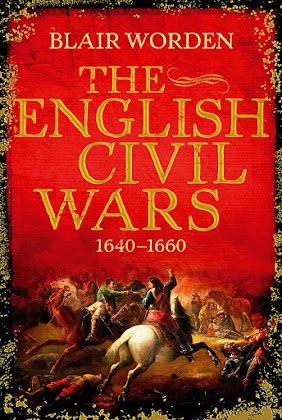 The seventeenth century was a time of  religious unrest here in The British Isles. I guess that the  pilgrims aboard "The Mayflower" in 1620 were but an early manifestation of that unrest. There were tensions between Catholics, Anglicans, Presbyterians and non-conformists. Undoubtedly, these  religious animosities were fuelled by political and social trends.

At the start of the century, the British people were ruled by King Charles I. He seemed remote from his people - especially the protestant community. Drawn to Catholicism he was a high-handed spendthrift, full of self-importance and frequently disrespectful of parliament. He ruled from 1600 to 1649 when he was beheaded in London.

I wanted to know more about the seventeenth century - especially the civil wars that affected the land in the middle of the century so I bought a book titled "The English Civil Wars - 1640-1660" by Blair Worden.  Though I came to that book willingly,  I am afraid that I found the reading of it rather painful.

What the drily academic writer did manage to convey is that these twenty years were confusing in so many ways. Skirmishes broke out hither and thither. People changed sides. There were executions and accusations. Parliamentarians argued interminably and there were issues surrounding taxes, war chests and land ownership. It was all very complicated.

With Charles I dispatched and his first born son in exile, Oliver Cromwell became the nation's leader on behalf of Protestantism allied with parliament and its "new model army". There was even a powerful movement to have him crowned as a new king but Cromwell resisted He himself died of natural causes in 1658 and soon after, Charles II was restored to the throne with the hope that the nation's wounds might be healed.

It was a very turbulent period in British history which foreshadowed the modern age. Of course I could go on and on about The English Civil Wars until you screamed for submission but I am no torturer. Newspaper and journal snippets that accompany Worden's book suggest that it will be "lively", "gloriously lucid", "easy and enjoyable" but I found that not to be the case.

To me it was pretty turgid. He didn't even pause to paint pictures of Charles I's execution or the life of Oliver Cromwell before he rose to power. It was all fact after fact with historical connections, speculations and implications but little colouring. Very dry and I would not recommend it but that is not to say that the history of The English Civil Wars is a subject to be avoided by general readers. It was a troubled but fascinating time in our history when of course America's east coast was still under British rule. The ripples went there too.