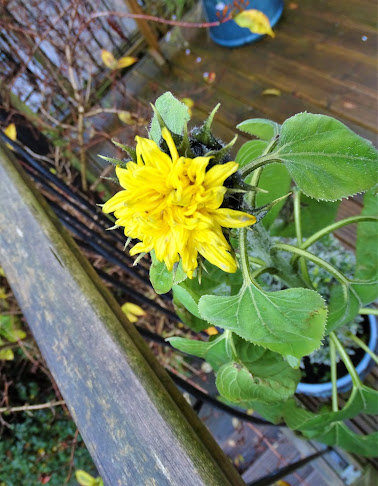 In the south west of Ireland, overlooking the ocean, there lives a man called David. He is not alone. There is his devoted wife who we shall call Pamela and his two grown-up sons who we will call George and Eric - named after two of Manchester United's greatest players.

David is  a keen gardener and so he spends a lot of time pottering in his polytunnel, listening to songs by his favourite bands - "The Osmonds" and "Westlife" - as he splits plants, repots them or sows seeds. There is always something to do in the polytunnel and a bonus is that gardening gets him well away from his nemesis - the dreaded vacuum cleaner!

The other day, David remarked upon plants that flower out of season and indeed plants that have been hanging in there since summertime here in The British Isles. In passing, I mentioned a particular plant that we have noticed on our top decking. It sprouted from a pot that contains a little hebe. It is very likely that a bird accidentally dropped a sunflower seed there.

The sunflower germinated and a plant rose up in the early autumn - too late for summer and then a small flower emerged. Not the plate-like flower that usually forms but a stunted yellow flower the size of a child's fist.

David requested photos of said flower so they are here with this blogpost. A sunflower in mid-December?  It may be perfectly normal in Florida or Australia but at this latitude and in this northern clime it is pretty unusual. I guess it helps that we have not had any significant frosts this winter - not yet anyway! 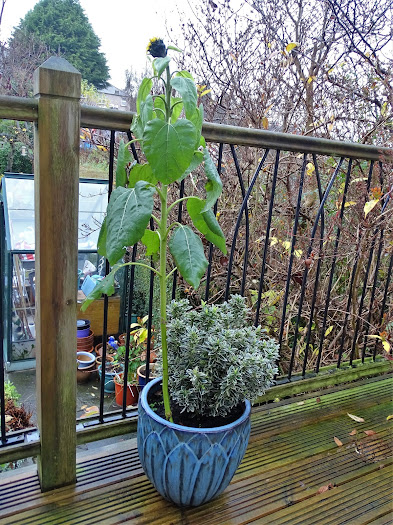