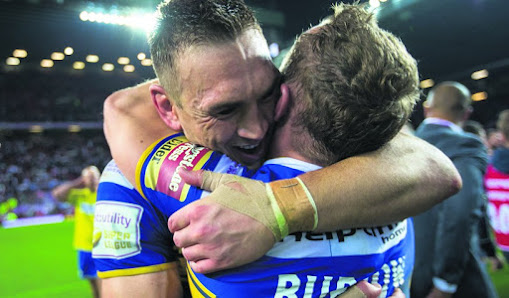 One of the cruellest conditions that any human being can face is Motor Neurone Disease. It's the very opposite of winning millions on The National Lottery. Famously, it blighted the life of genius physicist Stephen Hawking who, by the way, was very familiar with the Van der Graaf generator.
Here in the north of England, rugby league is one of our favourite sports. It's hardly played Down South at all. Traditionally, it has been played by tough working class men from hardworking families. In recent decades one of the elite clubs has been Leeds RLFC and two of that club's finest former players are Kevin Sinfield and Rob Burrow.
Both played for England and Great Britain and remain the best of friends. Kevin is now forty and Rob is thirty eight. However, twelve months ago it was revealed to the public that Rob was suffering from MND. He is now pretty much wheelchair bound and requires computerised voice simulation assistance to communicate.
Rob Burrow, a burrowing scrum half, always wore the number 7 on his back. Kevin Sinfield was a natural leader and usually played at loose forward. You can perhaps imagine how deeply Rob's worsening condition has affected Kevin Sinfield. What could he do to express his solidarity with and his fraternal love for his old teammate?
He decided to run seven marathons in seven days and as I write this blogpost he is running the seventh  - through the streets of Leeds. He is raising money for the MND Association. His target was £77,777 but it has been hugely surpassed and as I write over one million pounds has been pledged. It's a hell of an achievement by a player who is still known in rugby league circles as "Sir Kev".
I'm sure he wishes that the money would save Rob Burrow's rapidly declining life. It won't do that but it will help to fund further research into an especially cruel disease that quickly reduces sufferers to prisoners trapped in their own increasingly useless bodies. To donate, go here. 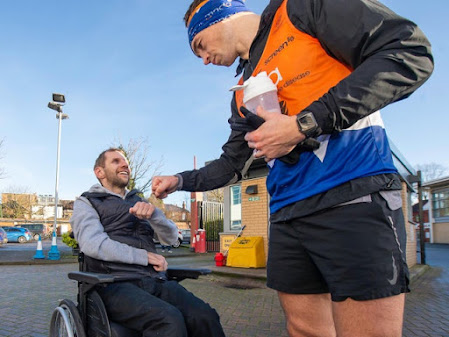