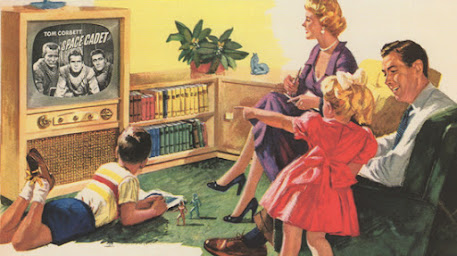 English people of my generation have always been fascinated by America and Americans. We grew up on American popular music, American films and TV shows and heard tales of American servicemen who fornicated constantly with our women when they were posted over here in the nineteen forties. They brought chewing gum, "Lucky Strike" cigarettes and nylon stockings - rather like missionaries in Africa with their gifts of beads and mirrors.
In my last blogpost, I revealed my intimate understanding of Americans. This was achieved not just through the popular culture I absorbed in my youth but via several research trips to the USA. I was first over there in 1972 and my last visit was in 2014. I was half hoping to make a further research visit this past year but that coronavirus thing got in the way.
This is what I wrote in my last post: "It is well-known over here in England that all Americans are stupendously rich. They drive around in massive cars and have massive refrigerators and every night they go to drive-in movies where they watch cowboy films on massive screens while munching huge handfuls of popcorn from massive paper buckets."
Here are some extra key points about Americans.
They are all born with pearly white teeth that are as straight and white as piano keys and they never need to visit dentists. Even elderly Americans smile brightly in their retirement villages. In contrast, all British people have rotten brown stumps in their crooked mouths.
All Americans know the lyrics of "Home, Home on the Range" - having learnt to sing it while sitting round campfires at summer camp.  It is like a second national anthem  and it is to me a little surprising that Lady Gaga did not sing it at President Biden's inauguration.
American mothers are all called "mom" and they like massive household appliances.  They make meatloaf every day apart from the days when they have pizzas delivered. American fathers like to sit in massive Lay-Z-Boys drinking "Rolling Rock" and watching baseball or ice hockey on their massive  TV sets. These fathers are all called Chuck, Hank or Doberman and when they come back from work they put their hats on hat stands before calling out, "Honey, I'm home!"
In every American home there is a massive arsenal of weapons. Americans like to venture out into the woods at weekends shooting moose and other "critters" which is the term they use for "creatures".  Oftentimes they cut off the animals' heads and mount them on their walls - like trophies.
In America there are no shops as such - just shopping malls. Every town has a massive shopping mall in the suburbs and everybody drives out to it at the weekend to buy clothing from "Abercrombie and Fitch". Nobody ever looks at the price tags and afterwards they get massive chocolate milk shakes and burgers before driving home.
In American high schools, the kids never do any school work. Boys play American football in helmets while girls join marching bands. Mostly school is about dating and planning ahead for the school prom. There's also a considerable amount of hanging about by school lockers.
Yes folks, I know a lot about Americans as the observations revealed above demonstrate. If you need any more information, please ask. My apologies to  Canadians and Mexicans who are, when you think about it,  also  Americans as they share the continent of North America. In this post, I was of course not referring to them.
Have a nice day y'all!
- January 29, 2021