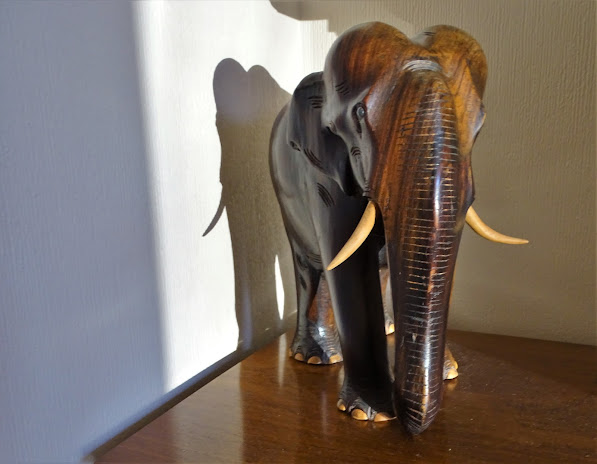 Karl has moved. For twelve years he stood upon the black marble plinth of the fireplace in our dining room but now he's in an alcove in the front room - standing upon a cabinet that an old friend called Colin Tohill made for us twenty five years ago.

Above Karl there's Fred Fox in his frame. I painted that picture myself after several trial attempts. I am rather happy with it and each day he reminds me that I should get painting again. I have a particular project in mind and have even purchased the required canvas. It's way past time to get cracking but procrastination has its delicious attractions.

We visited Goa on the west coast of India in 2008 and that is where we spotted Karl in the midst of a veritable army of carved elephants.  Here's what I wrote about him in September of that year:-

Karl the Mahogany Elephant. He stands about eleven inches tall. He's smooth and chunky. He has little white tusks and little white toenails and two beady little glass eyes. He stands on the polished black granite hearth, frozen in mid-stride. He is a souvenir of Goa. We bought him from a Kashmiri trader after numerous visits and discussions. On the last day of our Indian holiday we released him from captivity, wrapped him in Hindi newspapers and squeezed him into my hand luggage. Every carved elephant is a little different. Karl is named after a Brummie* we met at the Lui Beach Hotel in Candolim. He cost just under twenty quid.
*Brummie - resident of Birmingham, England
Karl is watching me as I type this blogpost. He is not trumpeting or surging across the room in a frenzied attack. He is just there, quiet as can be and still as a rock. He is as lovely now as he was that day we carried him back to the Lui Beach Hotel on the last day of our lovely holiday in Goa - almost thirteen years ago. 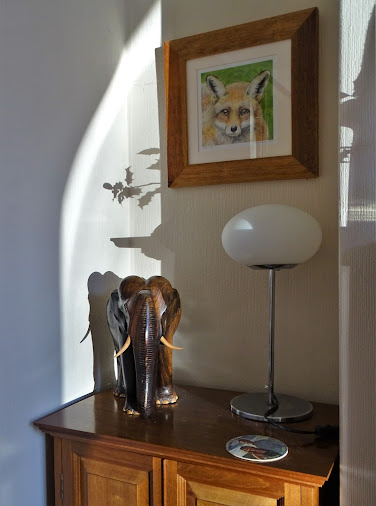