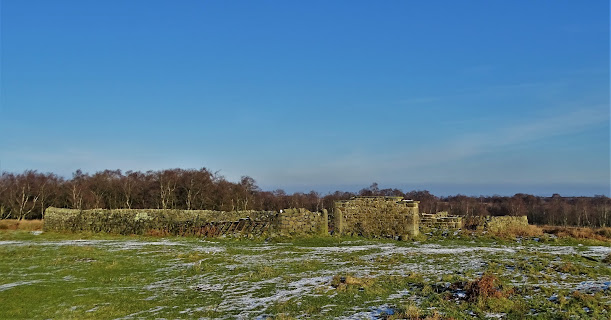 The ruins of Ramsley Lodge

Ramsley Moor is just west of the bent tree. Some moors are typically rugged upland places of heather and gorse where you may find hardy sheep grazing amidst the rocks. Other moors are flat, characterised by boggy ground and tussocks of rough grasses. Such is Ramsley Moor.

Yesterday was bitterly cold but bright and clear. I left Clint in a lay-by adjacent to the the A621 road to Baslow.

"Can't do that mate. I would have to leave the key in so somebody might steal you."

"How bloody compassionate! Don't mind me freezing my exhaust pipe off - just go and enjoy your ramble!"

I set off into the winter's afternoon and soon found myself at the ruins of Ramsley Lodge. Not the most picturesque of moorland ruins and  later on Google could not lead me to its history. Then I was plunging through straggly trees. The path led me to what is left of Ramsley Reservoir. It served the town of Chesterfield for over a hundred years but it was decommissioned twenty years ago.

After circling the reservoir site with its remaining pools, I thought I would head past the approaching woods, reach the open moorland and then head back to Ramsley Lodge across the expanse of tussocks. 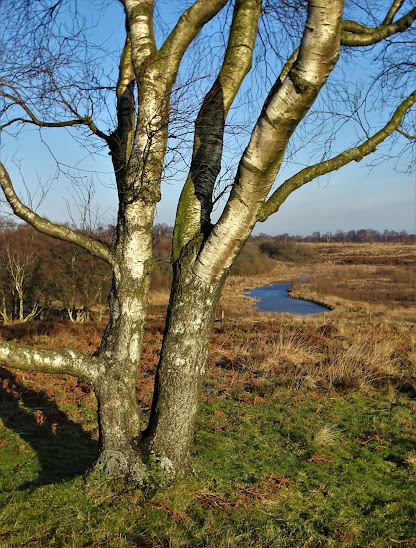 Tree above the hollow of Ramsley Reservoir

All was going well but in a fifty yard wide dip in the slight undulations of the landscape I discovered an area of boggy ground that soon revealed it was a quagmire with black pools of mud hidden beneath an icy crust that was itself camouflaged by the tussocks. 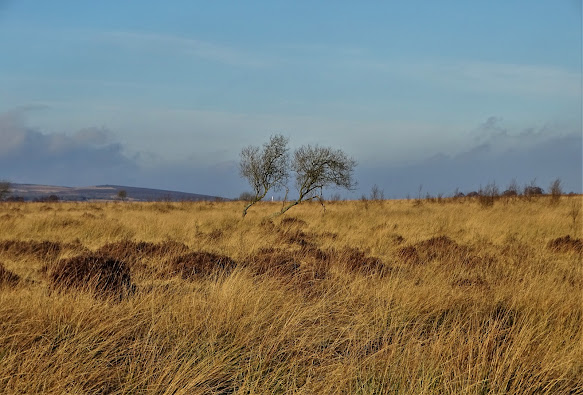 I tried to cross this unwelcoming zone in three or four places - at one point sinking to the very top of my boots. I was floundering and flailing around. If a drone with a camera had flown over me at that instant it would have gathered comedy footage of  a solitary human being in a Hull City manager's coat, being beaten by boggy ground as the sun lowered itself rapidly in the west.

It was sensible to backtrack - get out of the bog and retrace my steps. Back to the trees just north of the disused reservoir. There I discovered another treacherous path with swampy ground and mossy pools amidst malnourished saplings and rotten trunks. It was like being a character in a computer game. To win the golden rings you had to traverse the danger zone. I was Sonic the Hedgehog moving at the pace of a hedgehog.

And then before you knew it I was up through the trees and back at the ruined lodge, marching along the exposed path back to Clint whose teeth were still chattering.

On the way home, I stopped to take this picture from Owler Bar Road towards White Edge Lodge which is on the left... 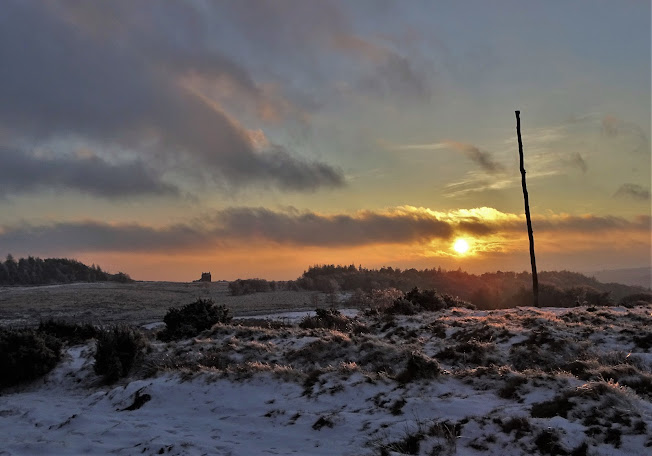