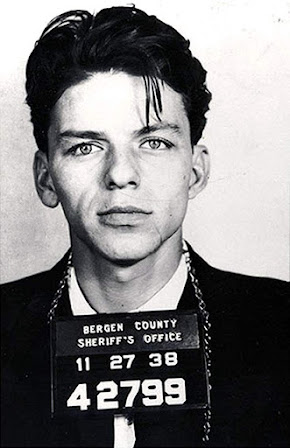 Frank Sinatra was a man of many parts. Like The Laughing Horse Blogger of the Year 2020, Sinatra lived a full life. He drank the wine and he heard the music.

I was lying in bed the other morning when the radio DJ played Sinatra's "It Was a Very Good Year (When I Was Seventeen)". A difficult song, rendered so effortlessly. He delivered it with nostalgic echoes from his own life woven into the lyrics.

I might have posted that song with this blogpost but instead I have chosen "Ol' Man River". It is said that when Martin Luther King Jr heard Sinatra singing this song live in concert, he wept.

Though Frank Sinatra was a drinker, a womanizer, a gambler, a film star, a man who hob-nobbed with presidents and underworld criminals, he was also fiercely anti-racist. Undoubtedly, his early life in a poor Italian immigrant community in New Jersey, made him understand what it is like to be excluded - on the outside. He didn't just think in an anti-racist manner, he got involved, did things. For example he was key to the desegregation of hotels in Nevada in the late fifties and early sixties.

Sinatramania was before my time. By the time The Beatles and Bob Dylan came along, he seemed to represent an earlier era and I admit that I did not deliberately listen to him though I was aware of the reverence in which he was held by many.

When he was born he weighed over thirteen pounds. He had to be yanked forcibly from his mother's womb with steel forceps. They left a deep scar on his left cheek which you may see if you look hard enough at the video. You may also notice the tears forming in his eyes as the song finishes. In his mind he had just performed a protest song, a hymn of unity that he had sung for years as the river kept rolling along:-