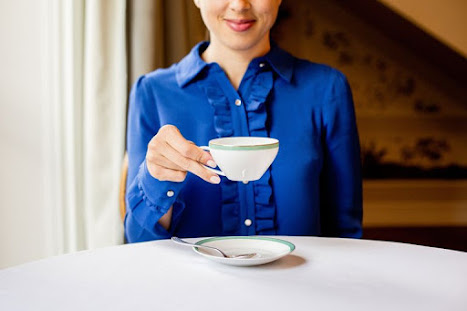 How The English hold a tea cup

Having described Americans in vivid detail, it is only fair that I should summarise The English. I am not talking about the English language but the English people. Of course Yorkshire people do not consider themselves to be fully English. We are first and foremost of Yorkshire and we trace our heritage back to Viking invaders and to the ancient kingdom of Northumbria.

No my friends, the true English live south of here in faraway counties with strange names - Surrey, Hampshire, Kent, Bedfordshire, Essex and the like. And of course that is where London is situated - the great metropolis of The English.

The English all talk as if their mouths are filled with marbles. Their vowel sounds are very similar. Favourite utterances of The English  are "Gosh!", "Golly!" and "Oh, I say!"

The English send their sons to boarding schools when they are still in nappies (American: diapers) where the play rugger and cricket, learn Latin, eat from tuck boxes and suffer physical or sexual abuse at the hands of their housemasters. Meantime English daughters ride ponies at gymkhanas, take piano lessons and stomp off to their rooms yelling "It's not fair!"

The English have afternoon tea every day. Crustless salmon paste and cucumber sandwiches are presented on cake stands with iced buns, scones and jam tarts. The tea itself arrives in a china teapot with exquisite cups and saucers and silver spoons.

In the summer they attend horse racing events at Ascot or ride their own horses across The South Downs or through The New Forest, yelling "Tally-ho!"

The father of the house is called either Tarquin, Douglas or Neville . He smokes a pipe while checking how his stocks and shares are doing in "The Financial Times". On weekdays he travels into London on a crowded train wearing a bowler hat, carrying an umbrella and a leather briefcase like all the others on board.

The mother has gardening gloves and secateurs to prune roses. She is called Arabella, Fiona or Belinda and she titters behind her lace handkerchief when ever her beloved husband makes an amusing remark. At Christmas she goes wild, treating herself to a small dry sherry. She has a spaniel called Tinkle who is an "absolute darling".

The English know little of Yorkshire and the other counties "Up North". They never travel there, preferring to visit The Isle of Wight, Cornwall or The French Riviera and Tuscany for their holidays. As old maps used to say of unexplored regions - "There Be Dragons!"

The English always vote for The Conservative Party and have framed photographs of Churchill, Thatcher or John Major in their bathrooms. Presumably, this avoids any need for laxatives. Out on their manicured lawns they play croquet and down in the village they occasionally visit "The Red Lion" to guffaw under the horse brasses with a buxom landlady called Joyce who is an "absolute darling".

Obviously, I could say much more about The English. I have observed them all my life. They are the true inheritors of The British Empire. If you require further information about The English please pose your questions in the comments below.