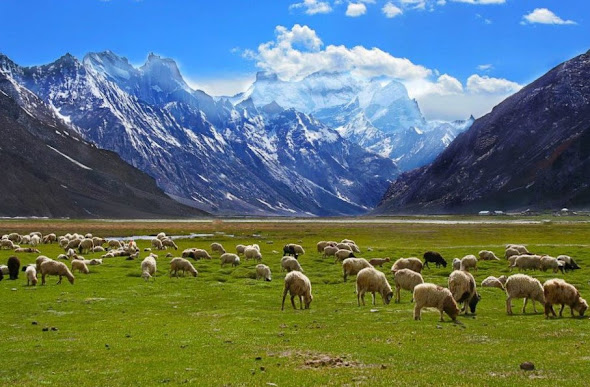 Back in 1944, my father Philip was  still in The Royal Air Force. He was based in India and worked in the meteorological department. Like other British military personnel sent to the sub-continent, he was fearful of a Japanese invasion that never happened. Hindsight can be a wonderful thing.

In the late spring of 44, just before his thirtieth birthday, he was granted a fortnight's leave with an air force companion called Arnold.  They planned to travel north from Delhi by train - nine hundred miles to Srinagar in Kashmir and then on to the Ladakh region up in The Himalayas.

They aimed to do some high level trekking in the mountains and have a genuine adventure nine years before Chomulungma (Mount Everest) was first scaled.. You can imagine that at that time - in the middle of a world war - there weren't many foreign trekkers out and about in The Himalayas and you can also imagine that in those days the kind of mountaineering gear we can easily buy today was simply unavailable - especially in remote regions of northern India.

Dad kept a diary of that memorable fortnight and when he got back safely to Delhi, he wrote a detailed account of the adventure. There are fifty pages of closely typed script. They are aging and turning brown now and some of the type is blurring. It can be pretty hard to read. 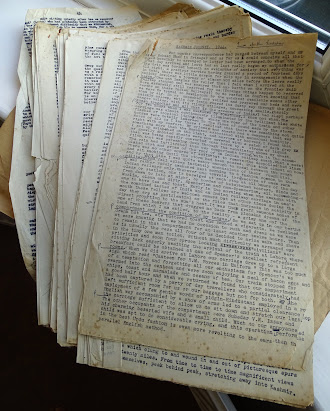 The account is in my possession and I know that I should take the trouble to read it all - every single word and perhaps transcribe it too. It would only take me a week or so to do.if I put my mind to it I doubt that anyone has read the whole thing since my father typed it out so painstakingly. I should read it all in honour of him.

However, all I have ever done is to dip into it and read small chunks. He called it "Kashmir Journey" and has then handwritten an alternative title - "The Lure of The Ladakh". Here he is on the first page in a sleeper compartment heading away from Delhi and out into the Indian night:-

The carriage was almost continuously illuminated by brilliant blue-white flashes of tropical lightning. while the roar of the train and any other sounds were obliterated by the flood of sound created by the storm. Worst of all, as I lay there I realised that something was not quite right with my bed. My pyjamas and sheets had a dampness that was something more  than one would normally associate with monsoonal weather.. I sat up, switched on  the light and horror of horrors! I found that my snowily dhobied sheets were now covered with a patch of dark grey filth that was streaming down through the ventilator above my chest.  The rain had infiltrated our compartment bringing with it accumulated dirt and grime from the roof of  an old Indian railway coach. What a mess!

And this in from page 34 when the Himalayan adventure is fully underway:-

To take The Himalayas lightly is the greatest mistake, almost crime, that a climber or trekker can make. These mountains never cease to reveal some new trait of weather, surface, slope or hazard and one has to be ever watchful and plan each stage with great caution. Here there are mountains that take months of organisation and a  month of climbing to reach the summit. There are no Alpine pygmies that can be climbed in a day from some luxurious  Swiss valley hotel. As we sat around our table, the mountain giants stood sentry over us in silence and in the colourful illumination of another majestic sunset.

Perhaps writing this blogpost will inspire me to read the whole account - some seventy six years after it was written. Dad died in 1979 when I was twenty five. If he had still been alive today he  would have been 106 years old. I don't think that a single day has ever passed by without me thinking of him. I know this might sound pathetic but even now, I still miss him.