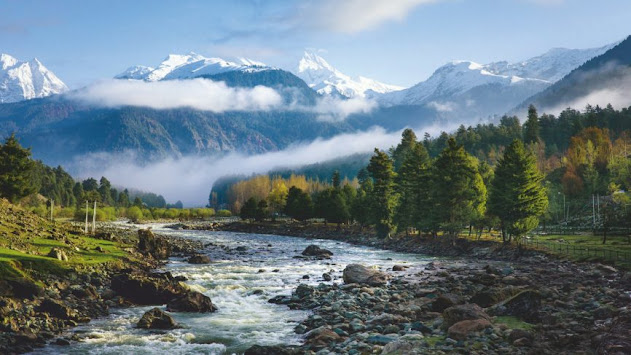 The Lidder river north of Pahalgam
Pahalgam is the last major settlement in Kashmir before mountain tracks take you up into The Himalyas. It is the meeting place of fast-flowing rivers and the starting point for Hindu pilgrimages to the very holy Amarnath Cave. It was here that my father and his trekking companion Arnold arrived in the springtime of 1944.

As urged by visitors to "Yorkshire Pudding", I am currently typing out and lightly editing my father's account of his trip to the Lidder Valley. So far I have managed to type twelve pages or 10,060 words. That means that I have another thirty  eight pages to go. It is a labour of love and I have enjoyed the intimate absorption of my father's  plodding expression. There's so much I would have liked to ask him about the adventure and I would have appreciated his approval of the small editorial changes I have been making.

I am determined to take this project to a proper conclusion seventy six years after my father Philip wrote about these special two weeks in his life - before marriage, before returning to post-war England, before children and before a long career dedicated to primary education here in Yorkshire.

For your interest from the typing so far - Philip and Arnold took a rickety local bus up into the hills beyond Srinagar. I found this section rather endearing - especially the sly glances at the beautiful Hindu maiden:-

I climbed into the bus and took my seat between two Hindu ladies – mother and daughter. Arnold was lucky and occupied the only “first class” seat alongside the driver and so he was not only able to stretch his legs but he was also in a position to pop off the bus at various stops while I was condemned to remain wedged in there with no room to move my legs with my knees pressed against the seat in front – painfully jolted as we drove over each bump in the road. Some compensation for my discomfort was afforded by a most interesting conversation with the older Hindu lady who spoke excellent English. She told me much of pilgrimages to Amarnath Cave, of the reasons for undergoing such a trial, of the horrible sights and sufferings along the route, of the cave and what goes on there during the “Puja” season. Today the pilgrimage is still a test of faith and physical endurance but the gradual opening up of Kashmir has enabled richer people and the less fanatical to complete the journey in a less rigorous manner.
The younger lady spoke very little but it was quite an enjoyable experience to just look at her. She was most graceful even to the movement of her hands and her grace was rendered even more delightfully by the striking emerald silken sari that she wore. Her face was quite pale and ornamented by the customary jewel in the side of her nose and a pair of ornate diamond earrings. In the centre of her forehead was a small bejewelled caste sign. A touch of fragrant perfume had evidently completed her toilet. When she did speak, the few words she uttered were most beautifully modulated. From her demeanour I should imagine that she was a most subservient and obedient wife to some pompous Hindu merchant. It is not to be wondered at that I stole many sly glances at her while conversing with her mother.

And I found this section funny - by their campsite at Pahalgam:-

On our return we found that our camp was in a state of commotion. Sidi had purchased a duck at one of the villages on the journey up. This duck had ridden in comfort and peace in the back of the bus. On our arrival at the camping site, Sidi had tied its legs together before turning it loose on the grass. Evidently the sound of rushing water had attracted Donald, and in no way abashed by the fact that his feet were tied he had made a beeline for the water in the proverbial duck fashion. When we arrived he was sitting on a rock in midstream preening himself and quite justifiable too, for he had braved and conquered a thirty knot current of rushing, icy water. Yet however clever our duck was we could not let that save him from the warmer comfort of the cooking pot at a later date. Besides it would be suicide for him to continue testing himself against that fierce river. Consequently our Sidi, ably assisted by Lusul the cook, laid plans to recapture our webbed friend. Looking as if he had no interest in the proceedings, Lusul proceeded downstream to a place where, if need be, he could make his way to the centre of the torrent by leaping from rock to rock. Sidi meanwhile entered the water from above the duck’s position and hanging onto a staff he gently stalked the errant dinner.
The duck continued to preen himself, apparently oblivious to the scheme that was developing with a view to recapturing him. However, when Sidi was about a yard away from him and it seemed certain that the duck was going to be a victim of his pride he suddenly without warning took to the water. Sidi gave one despairing cry and throwing caution to the four winds hurled himself at the escaping creature. In some miraculous manner Sidi seemed to get a hold of Donald and held on to him even though it meant full immersion in the stream. With a look of supreme satisfaction and triumph on his face, Sidi emerged from the water clutching the duck which quacked aloud its indignation. So our future dinner was saved and the whole incident had been a source of uproarious mirth for both Arnold and I for about a quarter of an hour. It was unfortunate that our sympathies were rather biased against Donald who had been both the source of amusement as well as the rescued main ingredient in a forthcoming meal. The direct result of the recapturing of the duck was that Sidi served our dinner that evening clad in a suit of new and impeccable white.
- February 17, 2021