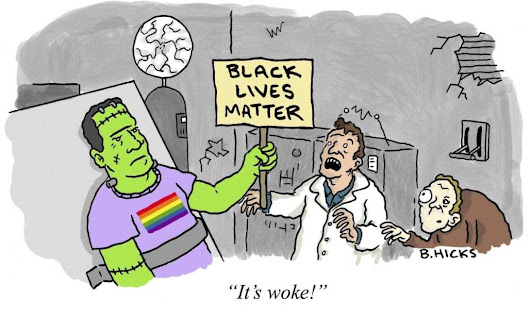 The English language is forever evolving. It is dynamic and open to change or addition. It always has been and I guess that it always will be. Pick it apart and you will find ingredients from all over the world and from every decade of its long and animated history.

In the last one hundred and fifty years, North America with its economic and cultural power has  been an important driver. "Jazz", "cool", "H-bomb", "far out", "mouse"(computer), "shopping mall",  "dude",  "truck",  "candy", "French fries", "hipster" and  "subway" form  just a small sample of American terms that have been absorbed into British English.

This morning I was investigating the term "woke" which has become a bit of a buzzword  in the last couple of years even though most native English speakers who are middle-aged or older may have little idea what it means and probably never use it.

"Woke" harks back to the nineteenth century when downtrodden black Americans were urged to wake up and be aware of the forces that were pressing them down. If you were "woke" you were less compliant, less blinkered - more aware of your position and the things that stopped you from being who you wanted to be - "free at last".

The word "woke" as used in relation to political awareness hung on through the twentieth century though it did not have much traction. As Wikipedia informed me, it was used in a 1971 in a play about the black political activist Marcus Garvey when one of the characters announces: "I been sleeping all my life. And now that  Mr Garvey done woke me up, I'm gon' stay woke. And I'm gon help him wake up other black folk."

It seems to me that to be "woke" is  essentially a very good thing.  To be informed about politics  and the forces that impact upon people's lives: What's wrong with that? Better than living in ignorance.  Only by knowing can one begin to press for change.

"Woke" gained currency with the rise of the Black Lives Matter movement. It was as if the word itself had been woken up. Suddenly its usage soared.

However, in the last couple of years, "woke" has attracted negative connotations - like barnacles growing on its underside. To some conservative or reactionary commenters, "woke" people are frequently seen as educated white folk who  are aware and informed of  fashionable world issues such as LGBTQ rights, environmental destruction, racism, corporate greed etc. - like being in a self-satisfied chattering movement that is somehow disconnected from reality. Those who are "woke" are likely to point fingers at others with a holier-than-thou attitude as they live their smug ethical lives in comfortable homes.

In the form to which I am referring here, I cannot say that I have ever used the word "woke" in conversation. It does not sit well with me but what I would say is that it might be nice to chisel away some of those reactionary barnacles and start to reclaim the word. Being "woke" or awake to the issues around us is, as I said before, a  laudable thing. I would rather be "woke" than ignorant and liable to sneering. at those who simply want this world to be a better place.
- February 19, 2021