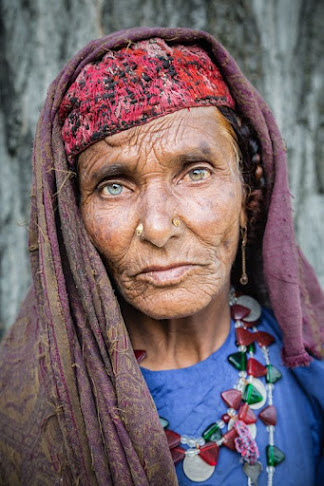 I have now typed twenty thousand words of my father's wartime tale of an adventure in northern Kashmir. His party has trekked beyond Lidderwat along stony tracks in the shadow of lofty mountains. They reach a high, treeless valley occupied only by Gujar shepherds and their families. This is his account.

After crossing the stream in the manner described, we found a cluster of Gujar huts. When I write “found” I am choosing my words carefully for it would have been quite easy to pass within close proximity of those huts and not notice them. Each consisted of a thick roof of logs jutting out from the wall of the valley. This was supported by uprights also made from logs of great girth and strength. The roof logs were reinforced with grass, earth and dung so that the thickness of the roof was two or three times bigger. The spaces between the upright logs were interwoven with thick grasses and all apertures were sealed with soil and dung. The huts were built in this manner so that the snow which must fall onto the roof during winter or which might avalanche would not cause the hut to collapse. The resultant disaster to Gujar inhabitants  was therefore avoided. Looking at these huts one could visualise the terrific weight of snow which they would be capable of supporting. The construction  of the walls was such that they would be draught-proof how ever much the demon winds of the valley howled around.

We entered one of these huts but the darkness, the stench and the filth caused us to give the interior only a cursory inspection. The floor was of hard stamped earth – thereby matching the ceiling and the walls. Wherever one walked, the supporting pillars for the roof impeded one’s movement. The nether wall of the hut was simply the sloping side of the valley and against this was piled a large quantity of drying wood ready for use during the ensuing winter. In the centre of the hut was an open circular hearth constructed from blackened stones. There was no outlet for the smoke and because of this there was a lingering smell of old pinewood smoke commingled with various other olfactory ingredients that together created a most powerful odour. The stink of human bodies unwashed for many months, perhaps years, the decaying flesh that clung to the sheepskins hanging over a beam, the droppings of sheep and hens that evidently lived in the hut, the odour of spilt milk long since soured, scraps of food rotting on the floor – all these combined to make the stale  air  in the hut so offensive to our nostrils that we quickly curtailed our curiosity.

The occupants of the hut seemed to be three women , about ten men and  an indeterminate number of children. All were very dirty almost beyond belief. The women wore voluminous blue smocks that covered them from the neck to the ankle. The smock was stained and dirty with the accumulation of years of spillages. Their faces were thin, hatchety and unlovely and at the time I thought of them as much like the reincarnation of my childhood idea of witches. Underneath a dirty cloth coal-scuttle hat, reminiscent of those worn  in England during the Cromwellian period,  was a tangled mass of thin, tightly-plaited hair. This hair was in such profusion that it did not take too long to notice that the women’s natural hair was interwoven with strands of horsehair and it was obvious that once plaited the hair was never unwound. Hanging from their ears were huge earrings of both silver and wood, which pulled their lobes down towards their shoulders. The men were tall in stature and they also wore smocks but of a drab stone colour. Over their shoulders they draped a loosely rolled blanket or shawl. Skull caps fitted over their closely tonsured skulls so that they had a rather monkish appearance. Their faces were a walnut brown, weathered colour with the texture of leather and they were all bearded. Apart from their unwashed state they were quite an attractive and fine set of fellows. The children would be difficult to describe for they were in a motley array of clothes or stark naked. They were thin-faced, unwashed but laughing, vigorous and with a bright, intelligent light shining in their eyes.