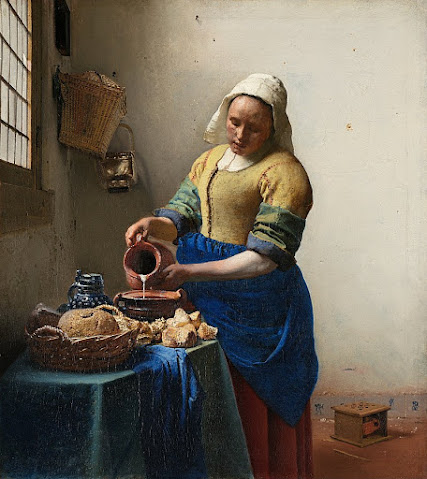 "The Milkmaid" by Johannes Vermeer was probably painted in 1658 and is displayed in The Rijksmuseum in Amsterdam. Vermeer created several paintings that were illuminated like this one - via the window on the left. Following his death in 1675, Vermeer's paintings were  largely ignored until an influential  French art historian began to sing his praises in the 1860's.

There is a lot more that could be said about this painting including its precision, its use of colour and the Dutch tradition of making images of maids. However, what I mostly wish to say is that I greatly admire this work. Because of a framed print my parents displayed in my childhood home, I have known it all my life. It seems almost timeless and celebrates the dignity of labour though I doubt that Vermeer saw it that way.

I imagine the model may have moaned to the artist, "Mr Vermeer, how much longer do I have to hold this bloody jug?  My arm is killing me!" Little did she know that over 360 years later  her sturdy image would be world famous.