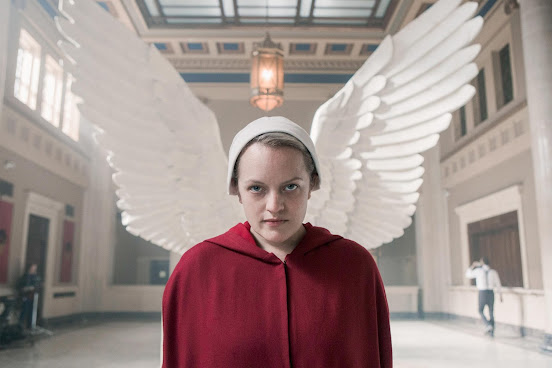 Elisabeth Moss in "The Handmaid's Tale"

Imagine a film that lasted for thirty four hours. Effectively, that is what I have just sat through. My viewing was completed last night.

Some of you may recall that last year I read Margaret Atwood's "The Handmaid's Tale", quickly followed by its sequel, "The Testaments". I was aware that a TV version of "The Handmaid's Tale" had been made  and I was keen to watch it . As it happened, in mid-January our daughter gave us a free connection to her Amazon Prime account and upon investigation I  found the show listed there.

I put the sidelight on, turned off the main light and settled down on our Lay-Z-Boy sofa with a glass of red wine. There were just ten episodes to watch and they stuck fairly closely to the novel itself. Little did I realise that when I first set out watching "The Handmaid's Tale" there would be more than one series of it. In fact there were two more series as the show springboarded into newly imagined territory but still very much within the spirit of the original dystopian novel.

Hence, I found myself glued to the box in the corner for thirty four hours and not the ten sessions I had been anticipating. I should emphasise here that I did not watch all thirty six episodes in one continuous shift. I saw them over a period of a month.

I have no complaints. It was a wonderful show in my humble opinion. I was gripped throughout. The cinematography was excellent as was the occasional and often quirky incidental music. There were many shots from above - undoubtedly assisted by drones and the colouration often veered appropriately towards soulless monochrome. However, there was always the blood red of the handmaids' capes.

It was another incredible example of what a bunch of human beings can do when they work together  towards a shared artistic goal - all pulling in the same direction. Actors and actresses, camera and sound people, scriptwriters, production staff, directors and costumiers. Really brilliant.

My hat goes off to Elisabeth Moss  who played the central character Offred, later Ofjoseph but really June Osborne. She was on screen for the majority of those thirty four hours - enduring torment, painful flashbacks, moments of delight, rape, childbirth on her own, all-consuming fear and the strength to fight back against the oppressive pseudo-religious state of Gilead. What a tour-de-force this was. More than acting it was as if Elisabeth Moss was really living the role.

Yes. It certainly was a marathon but I shall not forget this viewing experience  in a long time. I have a few lingering questions and reservations but it would be churlish to share them. Maybe "The Handmaid's Tale" would not be everybody's cup of tea but for me it was special and I will kind of miss my late night viewing  habit - occasionally accompanied by blood red wine.