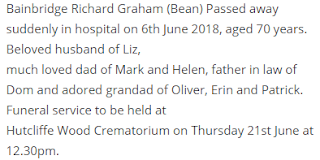 It was time to say goodbye to Richard at the local crematorium yesterday afternoon. The place was packed and the ceremony was non-religious, officiated by a humanist celebrant.

Richard had lived and worked in Sheffield all his life. He married and raised a family here. His house is but two hundred yards from the house he was born in, just round the corner from our house.

Since childhood he had borne the nickname Bean because when he was in primary school he was the bean bag monitor. Bean bags were sometimes used in physical education in place of balls. If you threw a bean bag across the school hall it wouldn't bounce away. The name Bean just stuck and he couldn't cast it off.

Apart from football, Richard also loved opera and had a fine singing voice. He had been an active member of several operatic societies through the years and plenty of his old opera friends attended the gathering at the crematorium.

Halfway through the ceremony, the celebrant invited those who knew the song "Eagle High" to stand and sing it. Songsheets were provided. It is a song I had never heard before. It comes from a less well-known opera by Gilbert and Sullivan called "Utopia Limited".

Forget the guy at the beginning of this YouTube clip. That part was omitted as about forty people rose to sing "Eagle High" for Richard or as they knew him - Bean. It was very moving and very personal. They sang their hearts out in love and respect for a friend who lived with gusto, positivity and humour:-
- June 22, 2018