The final and concluding part of Yorkshire Pudding's fascinating foray
into the world of telecommunications.
PART THREE 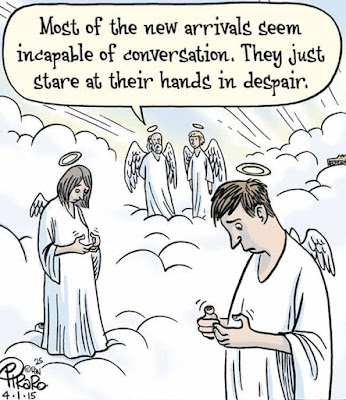 Nowadays we have five house phones. Three of them are wireless and need regular recharging. There's one upstairs in our bedroom, one in the study, one in the dining room, one in the lounge and a wall-phone in the kitchen. To dial numbers, you no longer have to wait for the circular dial to return to its starting position. We have push buttons for the numbers and besides, the phone receivers already contain our "favourite" numbers and we can use "redial" to phone back recent recipients of our calls.

In the past two decades the use of mobile or cell phones has of course become widespread. Mobile phone technology has revolutionised communication in previously unthinkable ways. More and more people are turning to smart phones that provide far more than phone call connectivity or the opportunity to text like a dervish. The modern smartphone is in fact a miniature computer with internet access as well as excellent camera technology.

My son and daughter have grown up with mobile phones and can hardly conceive of life without them. With their phones they can order "Uber" taxis, order takeaway food via "Just Eat" and find their way around places - either walking or driving. You can use a smartphone as a compass or a spirit level. You can find out what time it is in Sydney, Australia or what the weather is currently like in Outer Mongolia. Think of a question, any question and your smartphone will probably lead you to the answer.

It's a kind of magic I know but I have never owned a smartphone or indeed any kind of mobile phone. I have never sent a text message or used any kind of phone app. It's just that in the way I have lived my life, I never felt that I really needed a mobile phone. It was never a conscious choice, it just emerged this way. After all, for most of my adult life I managed perfectly well before mobile phone technology began to take over the world.

All of us have attitudes to mobile phones - whether we have one or have never possessed one.

I get angry whenever I see the driver of a motor vehicle speaking on the phone or even texting. This terrible habit has led to many road deaths and injuries. It is surely as bad as drink driving. I also get concerned about people walking across roads while talking on their mobiles and simply walking down the street while nattering into a mobile can be an open invitation to phone muggers.

Last New Year's Eve, Shirley and I took Frances and Stew to "Nando's" on Ecclesall Road for our last meal of the year. A family of six came to sit at the adjacent table and as they waited for their orders to arrive all six were separately engrossed in their phones - not communicating as a family but linking with the world beyond that restaurant - Facebook, games, sports, e-mails, dating sites and the like. I found this horrifying but perhaps that's just me.

The smartphone revolution is a worldwide phenomenon  that has largely passed me by though I have of course always been watching it from the sidelines. It has its negatives as well as its many positives. Who knows? Maybe one day I will feel the need to have  my own mobile phone but  until that day comes I am happy to continue living slightly off the radar, somewhat disconnected from all the babble - happy to not be contributing to the behemoths who have profited enormously from this social and technological revolution.
- June 29, 2018