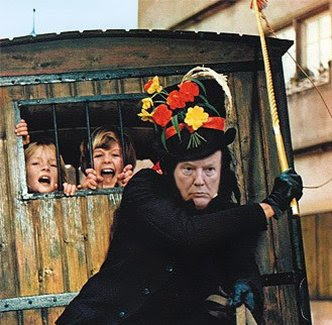 In both the film and stage versions of "Chitty Chitty Bang Bang" there is a scary character called The Child Catcher. The Child Catcher is employed by Baron Bomburst and Baroness Bomburst to snatch and imprison children on the streets of Vulgaria.

In the past week I guess we have all become aware of what has been going on at the US/Mexico border with regard to the tightening of immigration controls. For the past six weeks as would-be immigrant parents have been arrested, their children have been taken separately to glorified internment camps. It is estimated that some 2300 children suffered and are still suffering this traumatic separation.

Who is looking after these children? What are they eating? What are their sleeping arrangements? Who is counselling them? Are the adults who are charged with detaining the children suitably trained? What qualifications do they have?

When all is said and done, it is not the children who decided to up sticks and travel to the US/Mexico border in search of a better life in the land of milk and honey now led by Trump. The children are innocent so why should they be imprisoned in such dubious and ill-considered circumstances?

I think of those children - confused, in a foreign land - not knowing where their parents are or when they might meet again, far from the homes they knew back in Guatemala or Nicaragua or Mexico or Colombia or... The children are surrounded by other children - themselves strangers from other lands. I think of children sobbing themselves to sleep or frozen with terror.

One of the worst things about this cruel mess is that it appears the US authorities do not have clear documentation to link all the children with their parents with regard to current locations, family names etcetera. It is possible that some of the children may never see their parents again unless much more strenuous efforts are made to bring families back together.

It's a shameful business, really shameful and even Trump now seems to realise that he has gone too far. It's one thing imprisoning illegal immigrants but it is another thing entirely taking away their children and putting them separately into secure encampments.

You wonder what the world is coming to when things like this can happen right under our noses. America is meant to be about liberty and huddled masses, a land of opportunity and hope - not a country where innocent children cry themselves to sleep in bunk beds because of  The Real Life Child Catcher.
- June 24, 2018