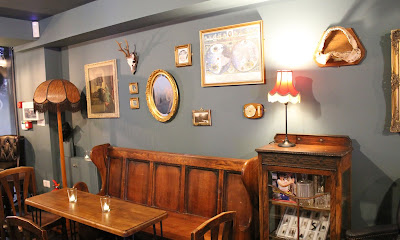 It was all going swimmingly well. There we were - the proud parents of the princess and Beryl and Peter - the parents of the fortunate fiancee. We were sitting in a micropub on Ecclesall Road called The Ale Club. In fact, we were sitting at the very table shown in the picture above.

We clinked glasses as we shared our joy and approval with regard to the forthcoming marriage. Pleasant conversation followed and there was even some talk about how the wedding arrangements might transpire though it's early days yet and all of that is still a long way off.

Peter is a local vicar on the cusp of retirement. An intelligent fellow, he never swears and lives a wholesome moral life illuminated by his Christianity. Beryl is an occupational therapist - also close to retirement - and quietly shares Peter's Christian outlook. On the other hand, I am a militant atheist.

My blunder happened like this. Peter mentioned a service station on the M6 in Cumbria, close to England's border with Scotland. I said I remembered that service station well and told this little story:-

"Twenty five years ago I was returning from a fortieth birthday party up in Perthshire. I parked up at that service station and headed inside for a mug of coffee and a snack. At the entrance I noticed a little bundle of banknotes on the floor. I scooped them up and popped them in my pocket. Then later when I was sitting down with my coffee I took out the small bundle and counted £65! It just about paid for my weekend birthday trip..."

Well. This met with Peter's stern disapproval and he queried why I had not handed the found money in to the authorities. But at a motorway service  station there is no clear reception desk and it would be exceedingly difficult to say who these so-called "authorities" were. So I kept the money for myself. As the old saying goes - finders keepers, losers weepers. Peter probably now thinks that the father of his son's bride is a moral degenerate who robs folk blind whenever he spots an opportunity to do so.

Of course if I had seen someone drop the money, I would have chased after them with it. But this money was just lying on the floor like litter. What would you have done?
- June 01, 2018