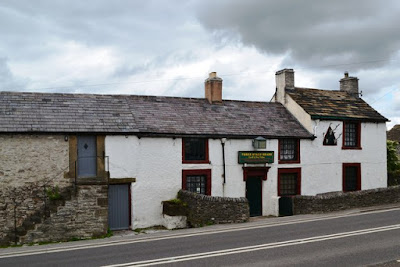 In the limestone country of the High Peak, the main road from Stoney Middleton soon brings you to the hamlet of Wardlow Mires. There is a very old pub there. It is called "The Three Stags' Heads Inn".

Nowadays it is only open to customers at weekends. I have driven or walked past it a hundred times or more but I had never been inside it until Sunday afternoon.

I pushed open the old wooden door to find a roaring log fire burning in an old-fashioned kitchen range. Seven people were sitting in the small room on  a variety of seats and ahead of me was a small wooden bar with  three beer pumps on the counter. Two bright-eyed whippets and a wire-haired Jack Russell  were also present.

I ordered half a pint of "Daily Bread" and turned to observe my fellow customers more closely.  They clearly knew each other and seemed a little surprised that a stranger had entered their midst.

An old man with long white hair and an unkempt white beard had a copy of "The Sunday Times" open on his lap. He was siting in an ancient Windsor chair with spindles. Across from him was another bearded man in a black T-shirt. These words were printed on the front of it - "Not Everybody Was Kung Fu Fighting". Sitting next to him was his missus in a red anorak.

A ruddy-faced local man was  comfortably settled into  his corner seat and on the window seat was the owner of the Jack Russell. His thin-haired companion tried to convince me that the dog owner was Ronan Keating of Boyzone fame but it was just a joke.

There was a second room on the other side of the fire, A few more customers were drinking in there and there were two stuffed foxes. This was the very opposite of a designer pub. The yard thick walls were painted dark green and there were old pictures of peakland scenes upon the walls. 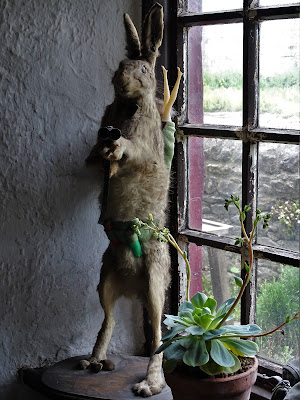 Returning to the first room, there was a curious stuffed hare in the window. He was on his hind legs and holding a small rifle. Behind the ruddy-faced man in that dark corner there was a glass case containing a mummified cat. I was informed that it had been discovered in a wall cavity during  repair work in Victorian times. It is believed that the cat had been placed in the wall to ward off evil spirits when the pub was built at the start of the seventeenth century.

I was only inside "The Three Stags' Heads Inn" for ten minutes but in that short time I had spoken to everyone in the bar room and learnt a good deal about the history of the  pub. It would have been nice to buy another beer and blend in with the locals, whiling away the rest of the afternoon but I had to get back to the wedding venue search party.
- June 19, 2018