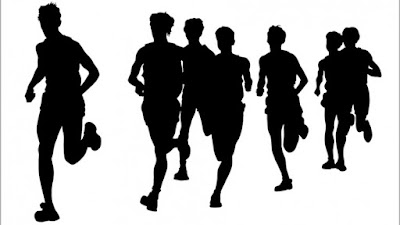 When I was a lad nobody went running or jogging. There were no training shoes and no one had ever heard of  sports brands like "Adidas", "Nike" or "Reebok". If such companies did exist we had never heard of them and nobody sprinted past in day-glo coloured lycra.

However, most secondary schools organised cross country runs that took place on bitterly cold mornings in late autumn. On our feet we wore football boots or canvas shoes that were known as plimsolls or sandshoes. They were especially water absorbent.

I detested cross country runs even though I was a keen rugby player. As  a rugby wing forward or hooker, the running was all about short bursts followed by little rests - not arduous and continuous forays through mud past leafless hawthorn hedgerows up around The Black Mill on Beverley Westwood. My lungs threatened to  burst through my rib cage. It was torture.

As a teenage schoolboy I had to travel by bus into Hull or Beverley every morning. Many of those mornings saw me sprinting two hundred yards down to the village  bus stop. There was never any time to spare. Nowadays I would never run for a bus. Apart from anything else I would be anxious about damaging my troublesome right knee and returning to square one in The Game of Pain.

No. I don't run anywhere these days. I just plod around like an Asian elephant upon a jungle track. But I notice so many runners around me - flashing by in the park or overtaking me on country lanes. There are runners everywhere. It's like an epidemic of running. Tight outfits, ear phones, plastic water bottles, face-hugging sun glasses and electronic wrist monitors that they stop to check out every mile or so.

Somewhat grudgingly, I guess I should say it's a very good thing. More people keeping their bodies in shape, keeping their hearts pounding, burning off extra calories. It's surely better than watching "Love Island" on the television while munching slices of pizza. However, if the running fashion had been around in my younger days, I very much doubt that I would have subscribed. Orange lycra simply does not suit me.
- June 17, 2018