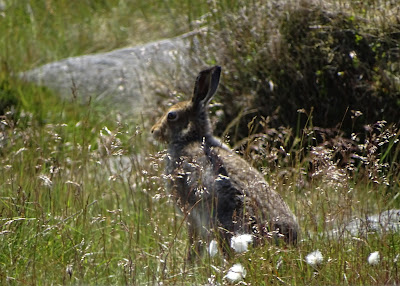 On the high moors of Bleaklow, north of The Snake Pass, I moved quietly from one area of unnamed rocks to another situated two hundred yards to the south east. I had already walked for four or five miles in the mid-summer sunshine and I was looking for a place to rest where I would eat my apple and drink some water.

I moved quietly and looking south over the treeless wilderness, something caught my eye to the right - about twenty yards away. It was a mountain hare standing stock still amidst the moorland grasses and bog cotton. Lepus timidus is a well-named creature for hares are understandably wary of human beings and indeed most other creatures including foxes, stoats and airborne raptors. 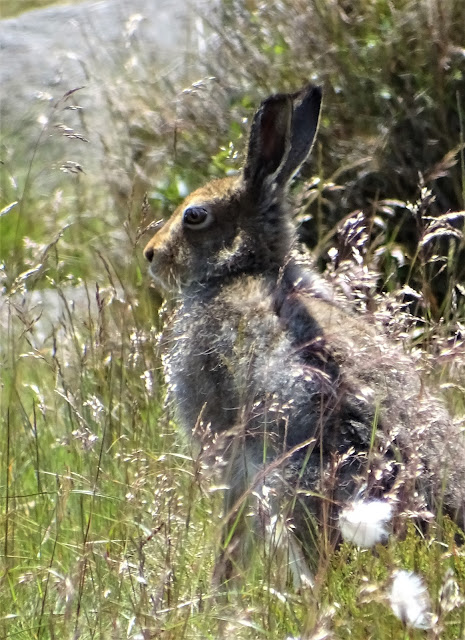 Slowly, I reached for my camera like a hunter reaching for his gun. But unlike the hunter I didn't wish to blast that beautiful hare to smithereens. I just wanted to capture his image there in his familiar moorland environment. Peaceful. Enjoying the sunshine. Taking a rest from his endless grazing.

It was a rare privilege and the highlight of my five hour moorland ramble. On the way home, I pulled into the car park of the remote Snake Pass Inn where I treated to myself to a nice chilled pint of bitter shandy. Nectar of the gods. 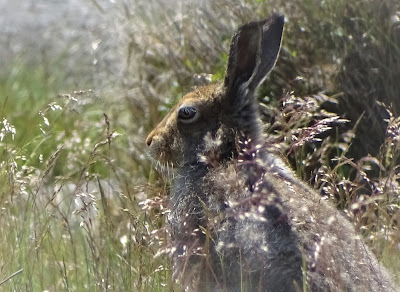