Yorkshire Pudding's fascinating foray into the world of
telecommunications. A three part series.


Before the mobile phone plague struck this planet, most households had just one phone. It was almost impossible to have truly private telephone conversations because the rest of the family would be listening in.

As a teenager, I would often make use of the red village  phonebox  to achieve some measure of privacy and usually I would be conversing with another teenager - normally of the female persuasion - speaking from another public phone kiosk in a different village or town.

In 1972 and 1973 I was a volunteer teacher on a remote South Pacific island. Nobody had telephones and in fact there was only one radio telephone on the entire island for making official or emergency calls to Viti Levu - the main island in the Fijian archipelago. To contact loved ones you had to write letters even though the island was only visited by official ships six times a year.

At university in Scotland between 1973 and 1977, I mostly stayed in campus accommodation. Each block had a couple of payphones on the ground floor. If I remembered, every couple of weeks I would phone home to Yorkshire. That was my only link back to my family and of course they couldn't phone me. There really wasn't much telephoning going on in those days. If you wished to speak with friends you went round and knocked on their doors.

Not long after  I first came to Sheffield, I live in a bedsitter - nowadays a "studio" (ha!) in a Victorian house with six other residents. After much petitioning, the avaricious landlord had a payphone installed on the ground floor. This was a great boon to our lives for it meant that no longer would we have to trudge three hundred yards to the nearest phone box on wet winter nights.

I met Shirley in late 1979 and the following year we moved into a little flat together. We had no phone there so it was back to the red phone kiosks once more. In 1981 we were married - the same year as Prince Charles and Diana Spencer - though our celebrations were slightly less lavish. After a one night honeymoon in Lincoln we moved into our first house together. In fact I carried her over the threshold in the traditional manner and soon afterwards we had a lovely green telephone installed courtesy of British Telecom. 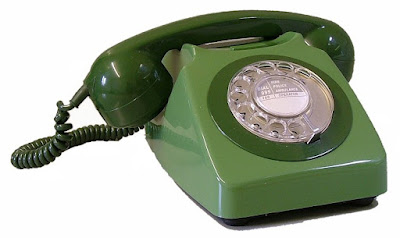