At Beeston, Leeds - close to those back-to-back terraces I photographed - there's a graveyard called Holbeck Cemetery.

I have know about this burial place for years because it was the inspiration for a very controversial poem by the Leeds poet Tony Harrison (born 1937). That poem is entitled "V". It focuses upon the Harrison family grave but it is not a poem of sweet reverence


The poet notices that the graveyard is "now littered with beer cans and vandalised by obscene graffiti". It is an angry, reflective and rambling poem delivered in over a hundred rhyming four line verses. He says:-
When I first came here 40 years ago
With my dad to 'see my grandma' I was seven.
I helped dad with the flowers. He let me know
She'd gone to join my granddad up in Heaven. 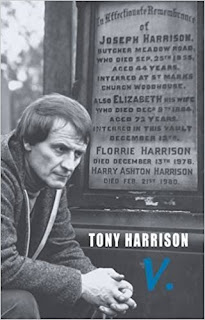 But as the poem advances there's a growing sense of frustration and anger. Harrison observes the cemetery's neglect and he reflects upon the way that life is changing and the mentality of those who would vandalise a graveyard. He turns some of that anger upon himself ..

As "The Guardian" once described it, "V" is indeed  "a timeless portrayal of working class aspiration". There are echoes of the past, the present and the future. Harrison has moved away from Leeds but this place is in his blood and he even contemplates being laid to rest here. What might be inscribed in his memory?

For readers of a prudish nature, I should warn you that if  you wish to investigate this poem, it contains numerous profane words that in my view, help to nail the anger and capture the linguistic poverty of frustrated working class youth - people without hope or route maps to the future.

But why inscribe these graves with CUNT and SHIT?
Why choose neglected tombstones to disfigure?
This pitman's of last century daubed PAKI GIT,
This grocer Broadbent's aerosolled with NIGGER?

The poem was famously and controversially  aired on Channel 4 in 1986. Written during the coal miners' strike of 1984/85, it is a poem for our times. Not safe and saccharine but bitter, confused and questioning, pushing boundaries, getting to the nub of things. It is a poetic tour de force and if you are interested, open-minded and have half an hour to spare, here it is.
- June 10, 2018