As expected there was a dirty great pole in front of me at last night's match. No, I don't mean a fat plumber from Gdansk or a builder called Wojciech from Wroklaw but an actual constructional pole that supported the stadium roof. I had to keep moving my head like a wary meerkat in order to see the goalmouth action at the far end of the ground.

To my disgust every supporter received a free England flag on a white plastic pole. That's almost forty thousand flags! What a waste of the Earth's resources. One day things like that will no longer happen. There's no need for it. At least it was nice to see that the matchday programme had been  printed on recycled paper.
England were all over Costa Rica from the start and we won by two goals to nil. I had a perfect view of Marcus Rashford's opening goal as the ball looped over the flailing hands of Keylor Navas - who by the way also keeps goal for Real Madrid.

Before the game, I stood proudly to sing our national anthem and during the match I joined in with the chant "England! England!" several times but my most raucous participation occurred when a chant of "Yorkshire! Yorkshire!" echoed around - for most supporters present were Yorkshire folk and there were seven Yorkshire players on the pitch including Harry Maguire who left Hull City last summer.

Long before kick-off I also noticed a Hull City banner in the far corner of the ground where the official England supporters band were assembling. My "Sony" bridge camera has an excellent zoom facility. 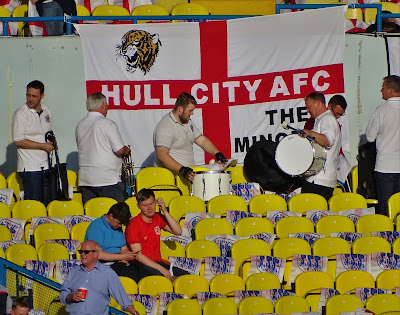 Silver Clint was left in a terraced street on Beeston Hill, close to Holbeck Cemetery. After the game I unlocked him, put the key in the ignition and was back home in Sheffield before the local pub closed. And yes - I did think of Richard. I am sure he would also have joined in with the defiant, "Yorkshire! Yorkshire!" chant. 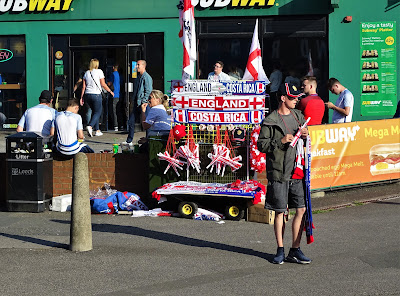