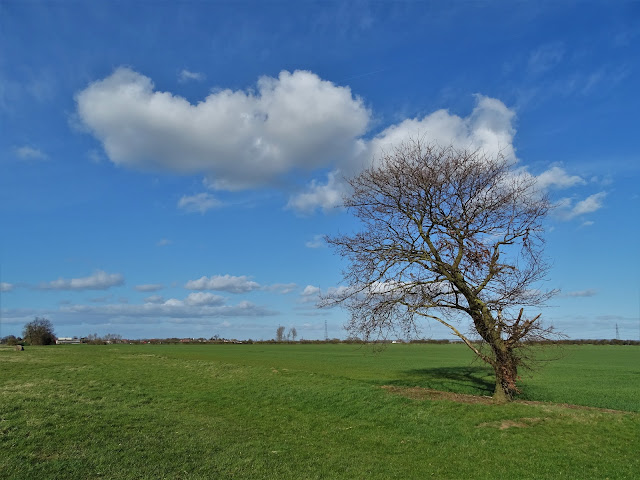 English weather? I love it. I love it's unpredictability. It seems like a metaphor for life itself. You never know what you are  going to get.

I drove up to the flatlands near the town of Goole - "England's premier inland port". I was there to walk and to take photographs in the beautiful light.
I walked in four villages I had never visited before. They all sit close to The River Ouse, protected from flooding by earth embankments and flood walls and pumping stations. They were - Old Goole, Swinefleet, Reedness and Whitgift.
South of these villages there is a wide expanse of flat farming land dissected by long straight drains. There are occasional lonesome farms and you ponder a while to imagine how it must be to live in such  places, without neighbours or communities.

Whitgift has a lovely old church made from limestone even though there are no stone quarries for many a mile. I imagine rafts and barges bringing the stone down Yorkshire's river system - probably from the ancient quarries nearTadcaster. The church was built in 1304 - replacing an earlier building. It seems almost incredible that our forebears would go to so much trouble transporting stone like that.
I would have tarried longer and explored some more. Perhaps I should have got there earlier but after five hours it was time to head home. I climbed in Clint's saddle and whipped his silver ass. To infinity and beyond! Well, Doncaster and then Sheffield...