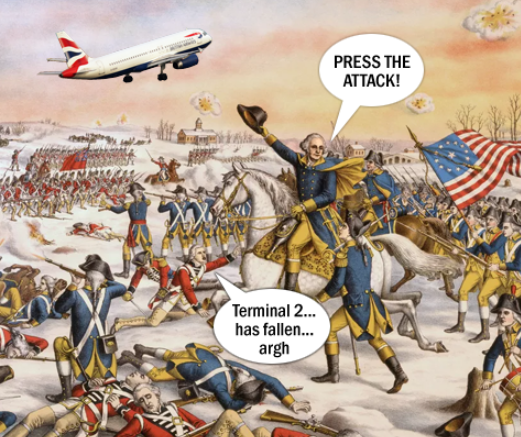 I think it was news to almost everyone that airports existed at the time of the American Revolution (1765-1783). But that fact came up on President Trump's autocue during the soggy and embarrassing July 4th rally in Washington and besides, the great man read it out so it must be right. There were airports at the end of the eighteenth century. Period.

Delving into this surprising nether world, I have uncovered some other historical surprises. For example, did you know that Joseph and Mary watched television on that famous night in Bethlehem 2019 years ago? The kindly innkeeper had set one up in the stable for them and they watched  live gladiator fighting from The Colosseum in Rome. Jesus was born during the second ad-break.

And here's another surprising fact about the Roman Empire. Led by Julius Caesar, the Romans invaded Britain on a P&O car ferry from France and their soldiers did not march north in sandals, they arrived on Volvo buses singing bawdy Roman songs while swigging cans of  Australian lager.

Moving forward in time, it is a little known fact that when voyagers aboard "The Mayflower" made landfall at Plymouth Rock in November 1620, those weary pilgrims checked in at a "Best Western" that overlooked the bay. Rooms were very cheap in those days but hotel fees still included basic breakfasts with coffee in styrofoam cups (British English: polystyrene).

Sometimes you think you have got a proper handle on world history and then all that you ever knew is thrown into disarray. Things are not always as they seem. There were airports on the east coast of America at the end of the eighteenth century along with aeroplanes and baggage handlers, check-in desks and airside stores where bottles of water were sold at exorbitant prices to travellers who had been obliged to discard identical bottles of water before passing through security.
- July 06, 2019