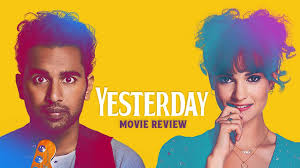 Friday was a rainy day. The weather forecasters got it right. I hadn't been to the cinema in a while so I checked out what was on at our local community cinema. Rather than going for a "hard watch"serious film I opted for "Yesterday" directed by Danny Boyle.  I knew it would be a light-hearted "feel good" film and I was in the mood for something like that.

The actor in the image at the top is Himesh Patel who played the hero - Jack Malik. The actress is Lily James who played Ellie Appleton. At one level, "Yesterday" is just another love story in which Jack and Ellie finally find togetherness.

The core premise of the film is both clever and amusing. Imagine a world in which nobody had heard of Coca Cola or cigarettes or The Beatles. Only failed musical performer Jack Malik  knows about The Beatles and before he realises what is happening he has become a worldwide phenomenon - performing songs like "Eleanor Rigby", "She Loves You", "The Long and Winding Road" and of course "Yesterday" itself. The rest of the world is wowed.

The film was all right. It amused me and held my attention but it is not the kind of film you remember and talk about forever. It was just all right. There was no seriousness. No political references. It was good to hear a handful of Beatles songs  delivered in such a setting and there was an excellent cameo performance by Ed Sheeran. A good way to pass a rainy Friday afternoon.
- July 21, 2019