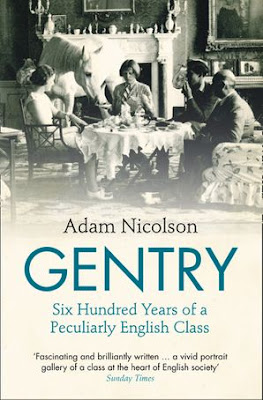 Near the reception desk of our little hotel in Santorini, there was a bookcase that contained dozens of paperbacks left by previous guests. I happily deposited the crime novel I had galloped through and looked for something else to read - something more intellectually stimulating.

Unfortunately, most of the books on those shelves were, to use a technical term, sheer crap. However, there was one about the English Civil War (1642-1651). I would have liked to read that but the font was microscopic so I ended up with "Gentry" by Adam Nicolson.

I finished reading it on Friday. It considers the landed gentry of England from the time of The Norman Conquest right through to the present day.

Who are "the gentry"? They are between the nobility and the ordinary populace. The nobility are like The Premier League of the British ruling class - dukes and earls, duchesses and countesses and their progeny. They still own huge swathes of the British Isles and they still have castles and grand houses and wield enormous influence. Below them the landed gentry of lords and ladies and knights with family coats of arms once owned most of the land, requiring their tenant farmers to cough up annual rents as they went hunting across the landscape or wined and dined in the lap of luxury.

The wealth and influence of the landed gentry has been significantly eroded in the past two hundred years. They own far less land than they used to and few ordinary people doff their caps to them any more. But they never went away. Many wealthy families still trace their continuing success back to landowning families that were rooted in the countryside.

On my walks around the British countryside I frequently come across grand houses in which the gentry consolidated their power. Their mark is everywhere. In the building of churches, in the names of country lanes, in the domestic architectures of villages and in the arrangement of farms and woodland. Their ghosts are imbued in the very landscape I tramp across.

Adam Nicolson focused on a handful of gentry families, using documentary evidence to reflect upon their successes, their failures and their evolution or disappearance in modern times. It was an effective means of examination because a comprehensive historical analysis of the entire landed gentry would be nigh on impossible. Better to pick just a few and dig deep.

My ancestors included rabbit catchers, cowherds,  gamekeepers, farmers, milkmen, railway workers and coal miners. There was not even a tiny hint of blood linkage to the landed gentry. They were a class apart, born to govern the land. My people were serfs - born to obey and born to pay.

I found Adam Nicolson's book most fascinating and I am glad that I picked it up. The gentry and their inheritors remain an important feature of what it means to be British. Their influence is woven into our culture like undeniable threads of filigree. You may not like them but they are still there.
- July 07, 2019