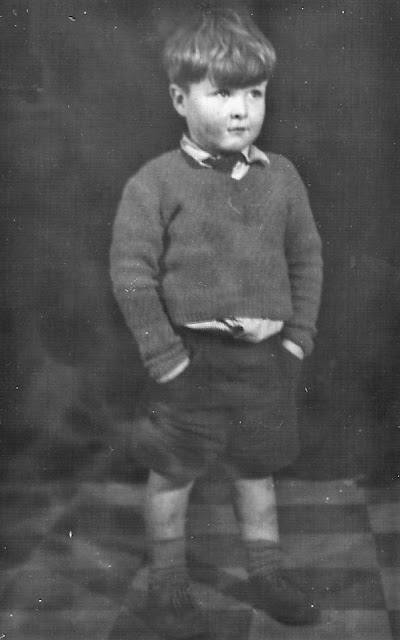 Over at "Going Gently", John Gray has been asking visitors to send in pictures that say "This is me".  The picture I sent him was the one shown above. It's me at the age of four and I expect the photograph was taken by my late father Philip some time in 1957 or 1958. I imagine he called me in from the garden where I had probably been playing or gathering caterpillars or scrumping apples and then he asked me to strike up a suitable pose.

Alternatively, it could have been taken by Alfred Assert who was the grumpy caretaker of the village school. Like my father, Mr Assert was also into photography. He smelt of pipe tobacco and had white hair..

There are several details I love about this image. My hands stuffed in my pockets, socks scrunched down,  dirty legs, shirt coming out, neck tie skew whiff, collar crumpled but above all I love the innocent expression on my chubby little face.

It's a piece of history - my history and the history of postwar northern England. Nowadays nobody dresses their little boys like that and thankfully you don't see that kind of haircut any more. It was a time of innocence... of cowboys and indians and conkers and jam sandwiches and certainty - when the whole world was still in shades of black and white.
- July 29, 2019