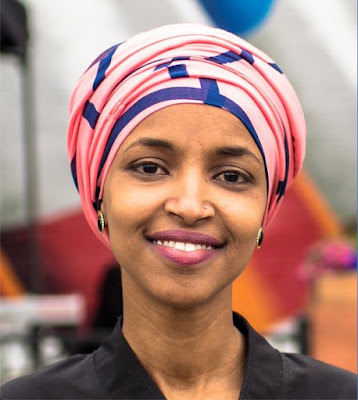 This is Ilhan Omar, a bright and brave thirty six year old American politician. She was elected to represent Minnesota's fifth district in the US House of Representatives.

Born in war-torn Somalia, her family fled to America when she was a small girl. In spite of the odds stacked against her, she has risen through local, state and national politics to become a significant voice on the left of The Democratic Party.

But for Trump and his evangelistic redneck followers, she has become a convenient  hate figure. On Wednesday in Greenville, North Carolina rabble-rousing Trump had his supporters chanting, "Send her back! Send her back!". This spectacle was as chilling as it was racist. Trump has turned Ilhan into a target for right wing lunatics.

What do they mean by "Send her back!"? She is a US citizen who deserves admiration  and applause. She is living proof that anyone can make it in America - even a Muslim woman from a refugee camp in Somalia.

Indeed, isn't  Ilhan genuinely from "Your huddled masses yearning to breathe free", now living in a land that proudly boasts that it provides "liberty and justice for all"?

"Send her back!"? Wouldn't it be better to send Trump back to his maternal family's humble cottage on The Isle of Lewis or back to Kallstadt, Germany  where his father's  family came from?  After all, Ilhan Omar surely better reflects the true values of decent American society than a draft-dodging playground bully who demeans women and is so demonstrably self-obsessed.